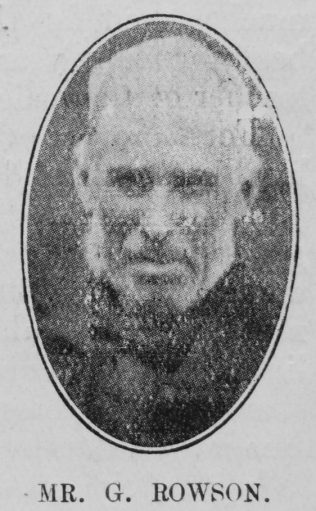 Transcription of Obituary published in the Primitive Methodist Magazine by William C. Ball

When a man has had an honourable association with a circuit for nearly sixty years, it is fitting that some memorial should be given to him. The late Mr. George Rowson, of Medlicott, had been a familiar figure in the Bishop’s Castle Circuit for that period, whilst his membership in our Church ran back at least to the year 1843. Our veteran friend had no striking episodes in his long career; and although in his prime he was a useful and an acceptable local preacher, he had never been a leading circuit official; nevertheless, he was, in a real sense, a man of mark.

The secret of his influence lay in his genuine goodness. He won the hearts of all by his transparent sincerity, and his unwavering loyalty to the service of Jesus. In his long life of eighty-three years, his Christian honour was never impugned, and if he did not lead in Christian work, he always worthily seconded every endeavour to promote the interests of our own and other churches. Generosity was one of his noteworthy qualities, and when our new church at  Bishop’s Castle was in course of erection, Mr. Rowson, though a member of a society seven miles away, sent an unsolicited donation of two guineas to the building fund. For many years he gave a golden piece at the missionary meeting, and one of his last acts was to remind his son that the time for his usual donation was at hand.

His eighty third birthday found him in wonderful health, with an undiminished interest in the circuit’s welfare; but shortly afterwards he began to break, and soon failed rapidly.

The writer visited him near the end, and found him very feeble in body, but strong and steadfast in Christ. He expressed the hope that he might live to celebrate his eighty-fourth birthday, which was only three months ahead, but it was not to be, and on the 27th of February, 1909, he passed beyond the veil.

“One family we dwell in Him,
One church above, beneath,
Though now divided by the stream
The narrow stream of death.”

George was born abt 1825 at Wentnor, Shropshire, to parents John, who worked the land, and Elizabeth.

He married Elizabeth Bright (1835-1908) in the spring of 1858 in the Clun Registration District, Shropshire. Census returns identify five children.