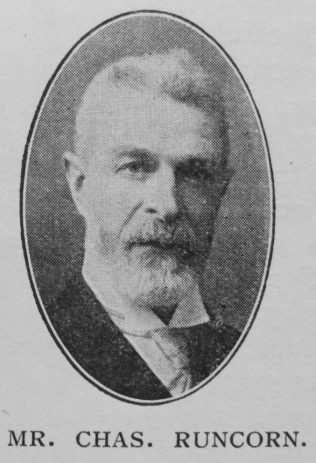 The subject of this brief memoir was born at Congleton, in Cheshire, on the 29th of May, 1846. His parentage was pious, the father being a local preacher in the Congleton Circuit for over thirty years. When eighteen years of age he was soundly converted and at once became a member of Society and continued so during the whole of his life. Two years after his conversion he came to reside in Crewe, where he at once associated with our Heath Street Church.

He was married to the surviving widow in 1871, and of the marriage there are six children, all connected with the Church. My first acquaintance with him was made in 1874, and when I became a class leader a few years later he and his wife joined my class. While health and vitality lasted, he was constant in his attendance at the class, and his testimony to the saving grace of God was ever given with the utmost confidence and in the fullest assurance of faith.

He delighted to talk of the champions of early days, who were fired with holy ardour and zeal for the Master’s cause, and to sing some of the old hymns. For upwards of forty years he served our Heath Street Church strenuously and with sincerest loyalty and devotion. He was a good man, and his life was an exemplary one to all with whom he came in contact.

His health began to fail in July, 1908, and for two years he suffered, sometimes most acutely, but bore his affliction with the utmost patience, and in entire resignation to the Divine will, calmly awaiting the call of the Master, which came on the morning of June 24th, and he whom we all loved passed quietly and peacefully into the presence of the Christ. He is not dead: God has but called him into the larger and fuller life. We shall meet him again —in the morning when the day breaks and the shadows have all gone.

He married Harriet Brook(e)s (1845-1921) in the spring of 1871 at Congleton, Cheshire. Census returns identify six children.