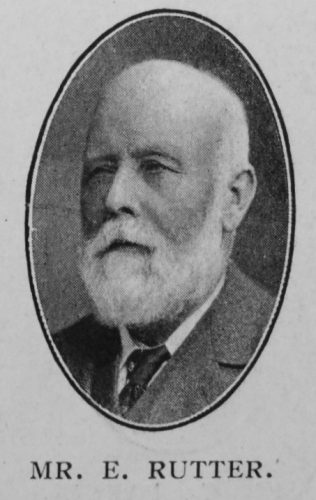 By the passing of Brother E. Rutter to the higher service, Bromsgrove Circuit has lost a man of fine character and splendid devotion. A Primitive Methodist of the third generation, his father was a pillar in our Catshill church for fifty years. His grandfather built us a synagogue at Wildmoor when we were a poor and feeble folk.

Enoch enhanced the splendid traditions he inherited. Well do I remember his conversion under the ministry of Professor Peake’s father. His gifts were soon recognised and a “note” was given him to accompany my father. An earnest and acceptable preacher he was for forty years, and served as Class Leader, School Superintendent, Steward, etc. Generous, too, he was, the new church at Catshill, built two years ago, being a monument to his liberality and zeal.

At the Leicester Conference he was among the first to promise a liberal donation at the inception of the Centenary Fund. And the Church delighted to do him honour, sending him often as delegate to Synod and twice to Conference.

Becoming a bread-winner at nine he tasted the hardships of farm service, and then became a stoker on the Midland Railway. Following in turn nailmaking, market gardening, fruit growing and farming, he forged his way to affluence, “giving thanks to God alway.”

Two years since he had a long illness from which he never really recovered. His end came serenely on Feb. 21st, at the age of 67. Great crowds assembled at the funeral and memorial services conducted by Rev. F.J. Harper. He leaves a widow with four sons and six daughters, all grown up and attached to their father’s Church. Two sons are stepping into some of the vacant offices. Great is their loss, but they have as their continual inspiration the priceless legacy of a shining example.

Enoch was born in late 1844 at Catshill, Bromsgrove, Worcestershire, to parents William Rutter, a nailer (1851), and Hannah Kendrick.