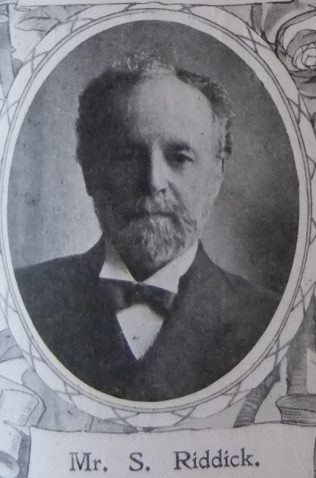 Mr Riddick is a worthy successor of a worthy line of Circuit Stewards. He makes an admirable Chairman of Committee, and “gets the business on” in an agreeable way. He takes a very great and unflagging interest in all circuit matters, and is at the present time specially interested in certain extension movements within the Circuit area.

For forty years he has served the Connexion heartily as a local preacher, and at Wootton Bassett for twenty-five years he has lived to exert an ever-widening and helpful influence upon Circuit life. Personally, he is a “brainy” man, fond of Biblical literature especially, and keenly interested in social and political life. A strong critical vein is allied to a dry humour and a great natural kindliness of disposition. It is pleasing to record that every one of his family is attached to, and busily engaged in, the work of our Church.

Silas was born in 1847 to parents Joseph Riddick and Sophia Badminton. Joseph was a wool weaver and groom who developed to become a shoemaker. Silas learned the shoemaking craft from his father and went on to be an outfitter and boot dealer with a printing and stationer’s business. Silas operated his business in Tetbury until circa 1880. His fifth child was born in Swindon, but by the time of the 1881 census, Silas had settled in Wootton Bassett.