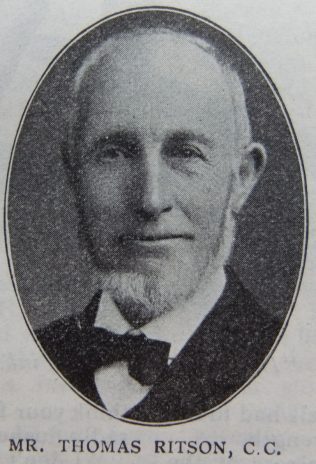 Transcription of ‘Sketch’ in the Christian Messenger by Rev. T. Pearson Ellis in the series ‘Veterans of our Local Ministry’

Among North Country Primitive Methodists, Thomas Ritson is both well known and highly respected. Unlike some men he is most honoured where he is best known. Naturally modest and retiring, he never shirks a duty, however difficult, nor remains dumb where a wrong needs exposing. He belongs to the type of Methodist which has made the name of Methodism fragrant to all but the arrogant and prejudiced, and to receive scorn from such is high praise. In all movements that have for their object the purifying of our national life, Thomas Ritson is an active worker.

Mr. Ritson was born at Lane Head, Allendale, in 1833. He was well born. His parents, Joseph and Jane Ritson, where staunch Primitive Methodists, and they sought to nurture their children in their own faith. Born into the Church, Thomas has never left it. It was in the year 1853 that he received his first class ticket at Correy Hill, West Allendale, and was recognised as a member of the Church. Four years later his name appeared upon the “Plan,” and since that time he has faithfully discharged the duties of a Local Preacher. He is the delight of the plan maker. He asks for no special favours. Wherever he is appointed to preach there he will be at the proper time. He is therefore equally popular with the Society Stewards, for they know there will be no need to search for a “substitute” that day.

In 1888, Brother Ritson left his native dale and removed to Bardon Mill, in the Haltwhistle Circuit. He had rendered invaluable services in the Allendale Circuit as a local Preacher, and also filled with distinction the office of Circuit Steward for the long period of twenty-five years. During his residence in the dale he had been in business as a builder, contractor and architect. In each capacity he did good work. The chapels he has built and the houses he has erected bear silent but eloquent testimony to his architectural skill and his conscientious workmanship. He is as religious in the business as he is when in the pulpit. This is high praise, but it is no exaggeration. It is the plain truth to say that his whole life has been a beautiful sermon.

We are pleased to say that Mr. Ritson’s worth has often received public recognition. He was for five years a member of the School Board at Allendale, and only retired from this work upon his removal to Bardon Mill, where he has become one of the most successful farmers in the district. He has strong views in the importance of unsectarian teaching, and will not lend his support to “Church” schools. This will be understood from the following incident. Soon after coming to Bardon Mill he was asked by the local vicar to send one of his men to load some coke for the Church Day School. This Mr. Ritson refused to do, not, as he explained, because of the cost, but as a matter of principle. This surprised the vicar, and he reminded our friend that he would not have refused that favour if he knew what a Board School would cost him in rates. But to this Mr. Ritson retorted that he had paid £9 in one year in Allendale for the sake of saving the children being taught what he did not believe in, and he was willing to pay again rather than have sectarian teaching. This was too much for the vicar, and from that time to this he has never asked Mr. Ritson to assist him in keeping out the dreaded Board School.

It might have been thought that such a sturdy Nonconformist would have had a poor chance of being elected a member of the Northumberland County Council when opposed by the local Squire. But this is what happened in 1898. It was a stern contest – the tenant farmer versus the landed proprietor; the Radical verus the Tory. The odds were great, but Mr. Ritson won with a majority of nearly one hundred votes. Since that time there have been three elections, but on each occasion Thomas Ritson has been returned unopposed. His fidelity to high principles and his transparent honesty have won the respect and esteem of all classes. In addition to his work on the County Council he has been Chairman of the Parish Council since its inception.

The Church has not been slow to recognise the value of such a loyal servant. For a great number of years he has been a member of the District Committee, and on several occasions has represented one or other of the District Committees at the District Meeting. As long ago as 1882 he was sent as a Delegate to Conference by the Sunderland and Newcastle District. This honour has not been his since, but we trust it may soon be conferred upon him again. He was a delegate again this year to the District Meeting. Fifty-five years’ membership and fifty-one years service as a Local Preacher ought to count for something. He is applying for Deed Poll membership this year and should there be a vacancy he has strong claims for election. Healthy, vigorous and alert, we fancy he has many years of service still before him.

As one thinks of Thomas Ritson, one is impressed with his deep spirituality. He is above everything else a religious man. This no one will no doubt, least of all those who know him best. With him worship is not a duty but a pleasure. His presence in the service is always helpful. And he is rarely absent. In all weathers you may depend upon him being at the service unless he be “planned” himself. When it is remembered that he lives two miles away from the chapel and is invariably present at the week night service, it will be seen that his religion is of no flabby kind.

He is a Primitive Methodist and is proud of the fact. It was one of his family who said to the writer that even a dog owned by a Primitive Methodist would be welcome at their place. Yes, there is truth in the statement. The generous hospitality of Brother Ritson and his good wife is well known to a large circle. The best is freely given. Yet after we have said this, and said it in sincerity, it is in the atmosphere of the home that we find the true charm of our friend’s hospitality. There is a Christian courtesy, a warm brotherliness and a grand simplicity which makes one remember the visit with genuine joy long afterwards.

That our brother is a stalwart Free Churchman we need scarcely say. He is no intellectual acrobat, jumping from point to point. You know where you may find Thomas Ritson. He stands by his principles no matter who may assail them. He has a backbone where it is feared some men have a piece of string. His Nonconformity is sturdy and robust in character; but he is no morose, sour-visaged Puritan. He has a fine sense of humour and can enjoy a joke, as witness the following story. The overseer and constable came to seize some of Mr. Ritson’s goods for the Education Rate; he is, as may be supposed, a Passive Resister. The overseer asked what he might take. “Oh, you will have to take the bull,” said our brother, “there’s nothing else for you.” But as it was a particularly ferocious bull, and neither the overseer nor the constable wished to leave the world just then, they pleaded for something else. But it was only after keeping them in suspense for two hours that he allowed them to take his watch instead of the bull.

It is not a little remarkable that one who up to middle age had been a builder and joiner should have made a successful farmer. In his former occupation he was singularly capable and successful, and it speaks volumes for his versatility and character that he should have been able, when well on in life, to turn to an entirely different occupation and command equal, if not greater, success. We question if in all Tyneside, that land of good farming, there is none more cleverly managed farm than Partridge nest, or one that boasts a finer lot of stock. Thoroughness is a characteristic of everything Thomas Ritson does; he never scamped anything in his life. Whatsoever his hand finds to do is done with his might.

A most capable business man, shrewd and far-seeing, our friend has had awide experience and brings the fruits of that experience to bear upon Church work. His advice is often sought, is freely given and is always valuable. He is a generous supporter of the various institutions of our Church. The orphanage, Aged Local preachers’ and Missionary Funds always benefit from his generosity.

Thomas Ritson is a man of whom our Church is deeply proud. Honours have not spoiled him, success has simply intensified his devotion to the Church he loves and does so much to adorn. He is known and respected by many of the Leaders of our Church, both ministerial and lay. As the brother of our Connexional Editor, he naturally takes a great interest in our Magazines, and has been a subscriber for a great number of years. We have pleasure in penning this brief account of one of nature’s gentlemen.

Thomas was born on 17 September 1833 at Allenheads, Northumberland, to parents Joseph Ritson and Jane Clemitson. Joseph worked as a builder and joiner. His brother, Joseph, was a PM Minister. Thomas was baptised on 24 September 1933 at Nenthead PM Chapel, Alston.

His obituary records that Thomas served the Henshaw Church as Trust Treasurer and Class Leader.

Thomas married Sarah White (abt1846-1927) in late 1884 in the Hexham Registration District, Northumberland.