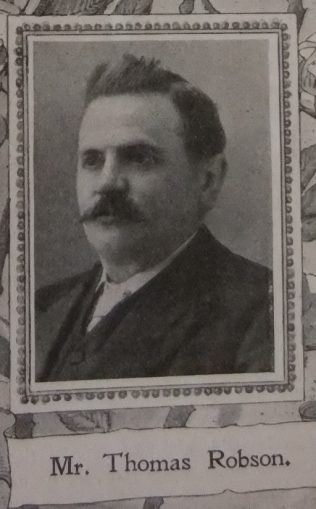 Thomas Robson, senior steward of Sheffield II., is a native of Middleton-in-Teesdale – one of the many invaluable workers the County of Durham has given to our Church throughout the land. Born of parents deeply interested in the welfare of our Church, he owes much to their influence. He is a local preacher of twenty-one years standing, a class leader, and treasurer of a heavily burdened trust estate. He has been twice delegate to District Meeting (once for Circuit and once for District Committee) and once to Conference. His interests are manifold. For three years he held the secretary-ship of the Sheffield Primitive Methodist Council and upon vacating that post was elected president. As Secretary to the Sheffield Local Preachers’ Association and in Christian Endeavour work he has rendered good service. Having but lived forty years much of life, it seems, yet lies before him. His wife too is a loyal Primitive Methodist and devoted to the cause.

Thomas was born abt 1866 at Stanhope, Weardale, Co. Durham, to parents Thomas and Ann. Thomas was limestone quarryman.

The family moved to Middleton in Teesdale and Thomas began work there as a labourer at the quarry. On moving to Sheffield, Thomas managed a café.

Thomas married Grace Todd (b1865) in late 1889 at Middleton in Teesdale. They had two children who died in infancy.