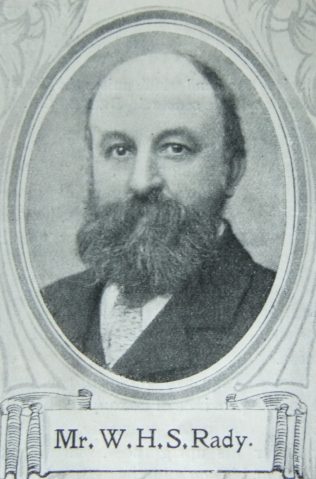 Mr. W.H.S. Rady, Liskeard Station steward, is the son of a Primitive Methodist. He became a member of the Liskeard Church in 1881, associated himself with the Sunday School and became a teacher. The following year he was appointed treasurer, which position he still holds; fifteen years ago appointed Society steward on the retirement of his father; for the last eight years he has been Station steward. He has a quiet unassuming manner, and although not gifted with fluency to occupy the pulpit, he is a man of very wide reading which is revealed when he is teaching in the school. He is cheerful, willing, always at his post, all his accounts always ready for the proper time. He is greatly respected by the whole town. Loyal to his church, he takes three magazines, and binds them together each year. He was very intimate with the late Rev. J.H. Best. Family all members.

William was born in 1851 at Liskeard, Cornwall to parents Simon and Mary Elizabeth. Simon was a labourer.

William worked as a harness maker.

His obituary records that he was one of the oldest Oddfellows in the town, having joined the Lodge in 1871, and passing through all the chairs with credit.