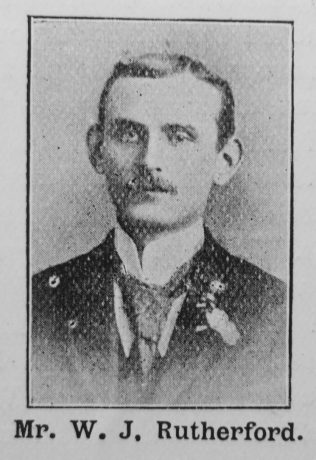 The painfully sudden death of Mr. W.J. Rutherford, at the early age of twenty-six, was a great surprise to all, and caused deep and widespread sorrow. His many friends watched anxiously as he lay ill, hoping and praying for his recovery. To their joy the clouds began to lift, hopes were revived, expectation was great, and all were anticipating a reunion in friendship and service, when, in a moment he was called home.

William John, as he was lovingly called by those who knew him, was born at Ushaw Moor, near Durham in May of 1875. His early life was much influenced by the frequent visits of ministers and preachers to the home of his parents. Throughout his boyhood he was closely interested in all the movements of the Church. In the 15th year of his age he definitely decided for Christ. The first efforts of the young Christian were very striking. His conversion was the giving of himself. Every opportunity was an opportunity for God. Hopeful, he inspired others, earnest and true he used every moment and every gift to the best advantage. Removing from Ushaw Moor to Durham 12 years ago, he became a teacher in our Jubilee School at Durham. Six months later he was appointed Secretary to the school. In this position he laboured with success until the day of his death. Discovering his capacity for work the Durham Church was not slow to place him in positions suitable to his talents. For some years he was choir-master. With the introduction of the Endeavour Society another place was found for him, and he became Secretary to the new movement. He was also Secretary to the Local Committee of the Mid-Durham Union of Endeavour, Circuit Secretary to the Psalmody Association, and Secretary to the Jubilee Literary Society. Into these various offices he put an amount of work that was truly surprising.

The wonderful influence of his life was discovered when we gathered for Divine worship the day after his death. There were many hands wrung in silence that morning – words could not express the feeling of the heart. We laid him to rest a few days later. Rev. J. Williams conducted the service in our own church, which was crowded by sorrowing friends, many prominent citizens attending. “I lift my heart,” “Nearer my God ” and “Lead, kindly Light,” favourite hymns, were sung. “The Dead March” was played by his friend and colleague, Mr. W. Scott, in a manner which told only too well that the heart’s sorrow was expressed in every note. The simple, beautiful, impressive service will be long remembered. We laid him to rest. We said of him “well done,” and then went home each with the purpose to do better than we had done in the past.

William was baptised on 26 May 1875. His parents were John Michael Rutherford, a colliery enginemen, and Jane Laidler Rutherford, nee Hall.