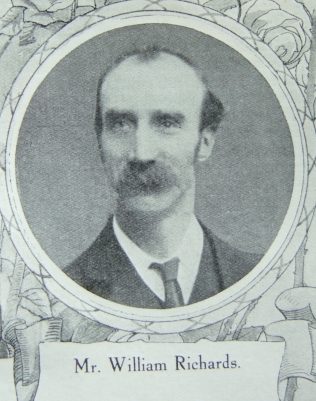 The genial Steward of the Erith and Belvedere Circuit leads a most strenuous life. Employed as a moulder with a large firm of mining engineers, his work lasts from 7 a.m. till 5.40 p.m. For many years, however, his practice after leaving the foundry in the evening has been to wash and change and then proceed to some service in connection with the Church he loves. As Choirmaster, Trust Treasurer, Sunday School Superintendent, he is a tower of strength to the cause at Erith. To his loyalty and devotion during the anxious years following the erection of the new church is largely due the present improved prospects. Of a retiring disposition, he does his work without ostentation, and is never more uncomfortable than when being publicly thanked for some service rendered. A fine Christian, a noble worker, a staunch friend, may he long be spared to serve the Church of his choice.

William was born on 29 July 1858 at Lambeth, Surrey, to parents Humphrey and Rebecca. Humphrey was a labourer and later an iron dresser. William was baptised on 19 September 1858 at St Mary, Newington, Surrey.

William died in the spring of 1919 in the Dartford Registration District, Kent.