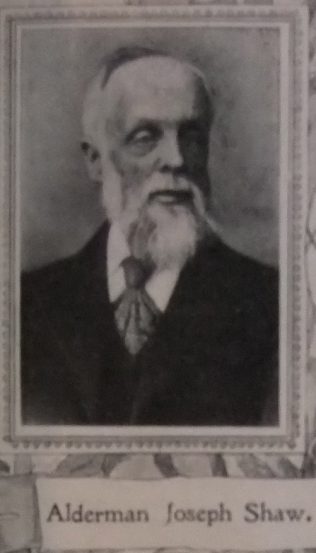 Alderman Shaw is a true and loyal member of our Bourne Church, Macclesfield Circuit. He has been connected with our church here for many years as a Sunday school scholar and superintendent having held the latter office for forty years to the entire satisfaction of all concerned. He is also an acceptable local preacher and class leader, and he has filled the office of Circuit Steward for the last twenty-five years. He has frequently represented his Circuit at District meeting and has twice represented the Tunstall District in Conference. Two years ago we built a new church and school at Byrom Street at a cost of £1,000, leaving a debt of only £370. Much of this good result is due to our steward’s good influence and untiring energy. He is universally respected not only by his own church but by all the churches of the town. We hope for him yet many years of usefulness.

The 1871 census shows Joseph working as an overseer in a silk mill. He went on to develop a business as a corn and provision dealer.