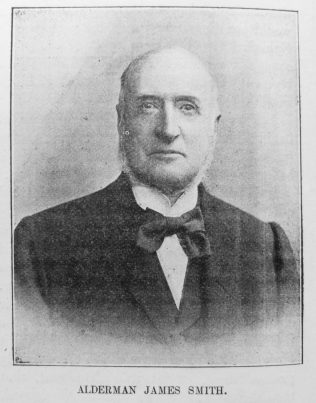 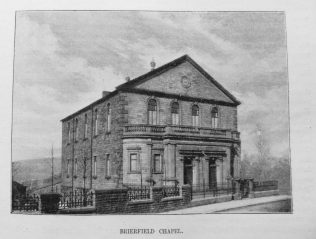 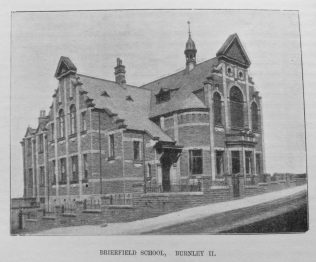 Alderman James Smith was born in Brierfield, near Burnley, on October 28th, 1828, and he was called to the higher life on July 24th, 1904. Until the age of twenty-one years our friend was a Churchman, but always a liberal in his religious creed.

His first deep religious impressions were received in an old-fashioned Primitive Methodist lovefeast, to which his saintly sister Mrs. Nancy Duerdon had invited him to accompany her. During the service his eyes were wet with tears, conviction took place, and soon afterwards, in a cottage prayer meeting, he entered by faith into the Kingdom of God.

Our Heyhead Trust property was then very insignificant as compared with our property now, but was rendered sacred with many hallowed memories – soon it became too small and a gallery had to be placed therein, but the friends thought such extraordinary expenditure could not be met, until our Mr. Smith made himself responsible for finding the money. In the meantime the population was gradually increasing and the little chapel was full to overflowing. Brierfield began to be known by the name of Old and New Brierfield. In the old part our church and others were situated, but in the New Brierfield near the canal and railway, hundreds of homes were being erected. Then came the question, are we to remain in the old part or go right down to the main road where the people are? It was a most difficult matter to determine, and formed a crisis in the Church’s history. An overwhelming majority wanted to remain in the old place and neighbourhood, and had we done so we could never have had our magnificent properties as shown in this sketch, or a Burnley II. Circuit.

Our friend stood for a long time alone in this forward movement in leaving the old neighbourhood for the new, and in securing the land on which our church and schools are erected – his business foresight enabled him to see that the old part would be deserted, and so it came to pass. So mainly through his instrumentality we got splendid sites on the main road .in the heart of the town – and now we have property of which our people are justly proud, in value £10,000, with a debt of only £1,500, and £415 standing to our credit for a minister’s house.

From the day of Mr. Smith’s conversion to the moment of his translation he was loyal to Jesus Christ and his Church. It was his highest ambition to give the best he had to promote the Kingdom of Christ and to extend Primitive Methodism. He was mainly instrumental in the formation of the Burnley II. Circuit — no mean task, with only three places and membership 400, heavy debts – and two married ministers – but he was a man of splendid initiative, strong individuality, and strenuous energy, and he never or seldom knew what it was to fail.

He was the first circuit steward, and held the position until a few years ago. He was an ideal class leader, superintendent of the Sunday School for over forty years, and never absent except when ill or away from home, and never known to have been late. He was clerk of the works during the erection of our church and school properties. He was the treasurer of the Trust Estates to the end of his life, and kept his accounts with scrupulous care, and rejoiced in the fact they had always balanced to the fractional part of a penny. He has travelled scores of miles soliciting contributions and has given hundreds of pounds for Trust purposes in the district. His social position was a valuable asset for Primitive Methodism and in securing money at a low rate of interest. He was very thoughtful and kind to the poor, full of sympathy for the sick, had great affection for and was wonderfully beloved by the children, he was a wise adviser in time of special trial, and at rue and sincere friend. Those who sought his advice felt they could trust him without reserve, and that confidence was never betrayed.

A life like this could not be confined to Brierfield and thus the power of his life was felt in our connexional life – he frequently represented his circuit in the District Meeting – and the District Meeting in the Conference. The Conference appointed him as one of its representatives to attend the Ecumenical Conference held in America, and on his return he was presented with a magnificent illuminated address by the members of our Church and Congregation. He was the first Treasurer of our Connexional Orphanage – and in company with the late Rev. W.E. Crombie. So efficient was the administration of the funds that on his retirement there stood to the credit of the Orphanage account, the sum of £2,945 6s. 11d. Brother Crombie and he were like father and son, and very happy in this work. On the occasion of his resigning the position of Treasurer, on account of advancing years, and suffering as he did from lapses of memory, the Conference of 1903 presented him with a beautiful illuminated address. He had no children of his own living, but it was his custom to say “I have so many at Alresford,” he looked upon the orphans as “God’s lambs,” and as his own sons and daughters, and would frequently say, “Look after the children, care for the children,” and none felt his loss more than the children.

The most interesting portion of his work was with the Lancashire Asylum Board, with particular reference to the Lancaster and Whittington Asylums, which he attended regularly. In a handsome volume known as “Lancashire Leaders, Social and Political,” we are told “There are few more widely popular or more generally esteemed than Alderman James Smith of Brierfield. . . His commanding presence, striking countenance, gentlemanly address, and manifest strength, mark him out as a leader amongst men.” And on the occasion of his death the County Council Clerk writes:- “Mr. Smith, by his courtesy and genial disposition, endeared himself to all those with whom he came in contact, in connection with county business.”

He was chairman of the School Attendance Committee of the Marsden District, managing director of the Brierfield Reform and Power Company, from its formation to find work for the people, and opportunities for the investment of small capitalists and others. Since his retirement from business, in the gift of time, thought, energy and travelling expenses he would give nearly £30,000 for the public good.

This outline leads us to think our friend led a very strenuous life. Early rising and systematic work only enabled him to get through his enormous amount of work. His agenda was carefully prepared for each day – and the work was invariably completed. This minuteness of care entered into each detail of his life, and in his last year he did as much work as would put to shame many a young man of twenty-five to-day. With all this work he found time to entertain his friends; he was very sociable – his cheerful and sunny smile was a benediction, and his optimism an inspiration.

With all these varied duties he was an intensely spiritual-minded man. His religion was a conscious living force. Everything he touched he made to glow with religious life. He loved God supremely. He had close fellowship with Jesus Christ. He prized the Word of God. He attended his class meeting, and his voice was frequently heard in the prayer meeting. He enjoyed the companionship and love of scores of our ministers, and was thoroughly loyal to our Church. And in all this he was materially assisted by his most excellent wife. When he married Miss Beales, of Manchester, he did the right thing, and just at the time when he needed a companion and helper, her incoming to his home filled it with the sunshine of heaven, and she became a source of strength to his religious and public life. They were very happy in each other’s love, and when the time of parting came it was a great trial, but our friend was ready when the call came, and his wife, with humble resignation said, “Thy will be done.”

Here then we have the record of a Successful Life – much beloved by those who knew him longest and best, and honoured by God and his fellow-workers. It is impossible to look upon the costly testimonials in the large case which is filled with these beautiful presentation pieces, and the addresses to which reference has been made, without thinking they form an interesting encomium for services rendered to the community.

James worked as a butcher.

He married Sarah Bulcock (1833-1885) in the spring of 1868 in the Clitheroe Registration District, Lancashire. Census returns identify two children.

James married Eliza Beales (b abt1842) in the summer of 1897 in the Chorlton Registration District, Lancashire.