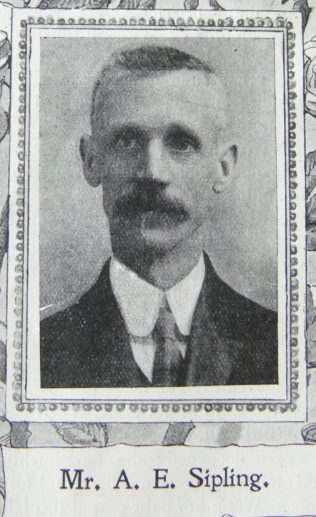 Mr. A.E. Sipling, Hull fourth circuit steward, is a native of the city. Early in life he joined Hessle Road Church, entered the Sunday School, for fifteen years officiated as society steward and is a trustee. His sympathies are not merely local, needy cases in the district find in him a friendly spirit. His promise is one of the largest in the circuit to the Centenary Fund. He was a delegate to the last District Meeting and Conference. Mow Cop Meeting is a special feature in his thirty-five years of church life. Mr. Sipling is interested in public affairs. He is a member of the Board of Guardians, a Liberal in politics. He is in the strength of manhood in appearance, slender in build and thoughtful in action, wise in council, considerate and kind in spirit. Mrs. Sipling supports him in church life and work.