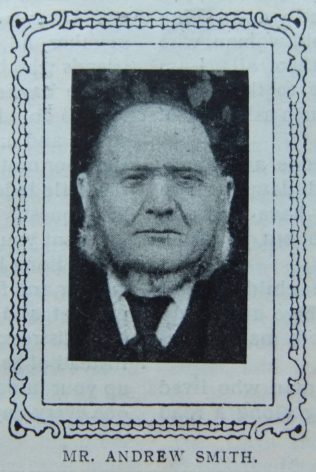 BORN at Hampstead Norris, in Berkshire, in 1846, Bro. Andrew Smith can tell many a tale of hardship endured in early days. When seven years of age his father was killed, which sad event rendered the burden of maintenance the more difficult, and as years advanced our friend was compelled to share the responsibility of the same.

At the time of his conversion, in 1870, Bro. Smith could neither read nor write. His only schoolmaster was Mrs. Smith, who, by patient industry and dogged perseverance, managed to teach him to read the “written Word.”

For many years now Mr. Smith has been a local preacher in the Newbury Circuit, as well as assistant society steward at Little Hungerford, his present place of residence. The possessor of a cheery, bright nature, an optimistic spirit, and a simple faith in the all-wise Providence, our brother gives utterance to plain truths in such a manner as to render his presence in our pulpits acceptable.

At camp meetings Andrew finds his battle-ground. The sight of a crowd of people in the open air is to him what the sound of the horn is to an aged hunter. At these meetings our friend is in great demand, not simply at home, but far beyond the confines of his own circuit. “Happy Andrew” is generally the last speaker. No matter how tedious previous speakers may have been, the audience is quickly roused to listening-point when our friend begins to deliver himself, and as a rule some “home-thrust” is sent forth ere the meeting closes.

Three years ago Mr. Smith suffered a severe loss in the death of his wife, who, through many years of varied experience, had been his companion and helper.

Andrew was baptised on 19 April 1846 at Hampstead Norris. His parents were Richard and Jane. Richard worked the land.

Andrew worked the land throughout his working life.