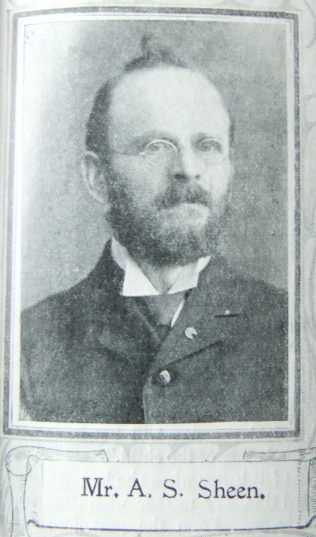 Our “Circuit Chancellor,” Mr. Arthur S. Sheen, is young in his present office, but well qualified to fill it. Born in Radnorshire in 1863, soundly converted in 1881, he became a local preacher in 1884. From 1887 to 1897, he did good service at Newport, Mon., and in the latter year moved to Smethwick, Birmingham III. Circuit. He has ably filled nearly every office in Church and School, and has been a delegate to District Meeting and Conference. At present he holds office as Secretary to Local Free Church Council, and has several times represented it in the National Council. In C.E. work he is always to the fore, and has once been President of the City Division of the Birmingham District C.E. Council. For his loyalty to the Passive Resistance movement he has recently been disfranchised. A local preacher with a well-equipped mind, a strong personality, an attractive style, he is much prized for his services both in the pulpit and out.

Arthur was born in 1863 at Rhulan, Radnorshire. Census returns suggest he was brought up by his grandmother, Ruth.

Arthur was a carpenter, however, the 1911 census return describes him as a pastor of a Primitive Methodist Church.