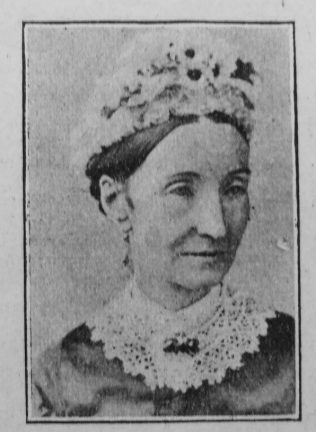 Elizabeth Slater was born at Featherstone, near Rochdale, on January 17th, 1837, and passed to her eternal rest on Wednesday, June 29th, 1904. She was the daughter of James Kershaw, who was a woollen manufacturer in business, and, in church relationship, a Wesleyan Methodist. Brought up in the church of her parents, Elizabeth Kershaw was early in life converted under that eminent evangelist, reformer, and saint, the Rev. Charles Garrett. Upon her marriage, at the close of his probation, to the Rev. John Slater, she joined our branch of the Methodist family. Through Mr. Slater’s lengthened and distinguished career, she was a faithful and capable help-meet to him, her gifts and service, laid with unstinting devotion on the altar of the work of the church, contributing in no small degree, to his success. “The heart of her husband did safely trust in her.” She was a person of considerable force of character. Notwithstanding her physical frailty, she displayed great initiative and energy, succeeding in everything that she took in hand, and often surprising her friends by the amount of her accomplishment. Her name is revered in the three Sheffield circuits in which Mr. Slater spent the latter part of his service as a circuit minister, and it is fragrant also in all the spheres in which he earlier laboured. Perhaps the greatest work of her life was accomplished in the Higher Ardwick Church, Manchester, in the Presidency of its large female Bible-class, and in financial effort for its Trust Estate. Mrs. Genney, an old and valued friend and co-worker, attended her funeral with Mr. Genney, and brought from the Higher Ardwick Church and congregation a resolution of sympathy and appreciation, expressing the “very kindly remembrances entertained of the splendid work Mrs. Slater did in conjunction with the late Rev. J. Slater, both in helping in the erection of the Higher Ardwick Church, and in the society and Sunday School.”

With regard to her discharge of home duties, which were not allowed to suffer in any way through her work in the church, her children say, “She was a good mother to us, kind, generous, and loving. Nothing was too much trouble for her to do for us.”

In her religious character and life, Mrs. Slater was a radiant spirit. She knew the blessedness of the kingdom which is “righteousness, and peace, and joy in the Holy Ghost.” She “walked in the light.” Her winsome disposition and manner made her “troops of friends,” and won to her aid numbers of helpers in the many good works in which she engaged. Trials, anxieties, sorrows, personal weakness, of which she had her full share, did not weaken her confidence, nor dim the brightness of her hope. “Though cast down, she was not destroyed,” but, “in all these things was more than a conqueror through Him that had loved her.”

The sudden death of her husband, a few months after his entrance upon the office of General Missionary Secretary, was a heavy blow. Already enfeebled by illness, she was never well again. Prostrating weakness of the heart supervened. On rare occasions, when a little better, she attended the means of grace, as she eagerly wished to do. Gradually this became impossible. She was confined to her home, and finally to her bed. Her sufferings were often severe. But through all, her unfailing patience, her cheerful manner, her bright smile, her intelligent interest in all that concerned the welfare of her family and the church, her words of trust, her appreciation of the ministry of consolation and prayer, were very beautiful. It was a means of grace to visit her. “Patience had her perfect work,” till she seemed to be indeed ripe, “perfect and entire, wanting nothing.

The end came somewhat unexpectedly, following upon a sudden change for the worse, in her illness. Without a struggle she fell asleep, to awake and find herself with Christ and dear ones in the Homeland. She was interred in the City Road Cemetery, Sheffield, on Saturday, July 2nd. A service was held in the John Street Chapel, conducted by the Rev. P. Nume, assisted by the Revs. G. Hunt, W. Travis, S.A. Barron and J. Bowness. A large attendance testified wide-spread sympathy and respect. A memorial service was conducted by the writer in the Abbeydale Church, of which Mrs. Slater at the time of her death was a member; and at the John Street Church, also, the Rev. W. Cutts paid a tribute to the memory of the deceased.

Elizabeth’s parents were James Kershaw and Elizabeth Clegg. Her baptism record and 1841 census suggest she was born in 1835, not 1837 as stated in the obituary.