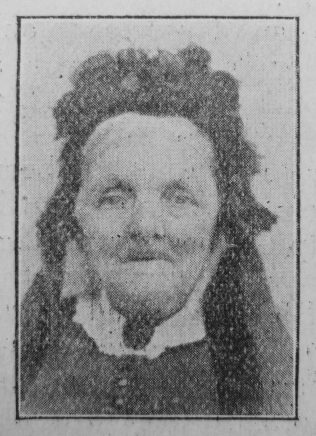 Transcription of Obituary in the Primitive Methodist Magazine by E.W.G. (Edward Waddington Gibson)

Mrs. Elizabeth Smith passed away at Bradford, on June 9th, 1904, having reached the eighty-fifth year of her age, and her seventieth year of unbroken membership in our church. She was born September 18th, 1819 at Tadcaster. Her parents were both Primitive Methodists, her father being a local preacher on the Tadcaster Circuit; hence her earliest associations were with our people. When fifteen years of age Elizabeth was converted and at once joined our church and became an active and ardent worker.

When she was married to Mr. Smith they removed to Aiskew in the Bedale Circuit, and at this place Mr. and Mrs. Smith were eminently useful to our church. Their home was a Primitive Methodist Preachers’ home. And when homes and friends were few, shelter and kindness were ever to be found there.

It was a rare treat to hear Mrs. Smith tell of those days and those men.

At Aiskew the largest room in the house was set apart for our people to worship in, and many a powerful and soul-saving service was held.

Because of their loyalty to our church, Mr. and Mrs. Smith experienced much persecution. They were turned out of one house because they refused to discontinue the services and cease taking in the preachers. Other property owners in the district were warned against having them as tenants; but they trusted in God and were helped. One gentleman to whom they applied for a house refused to let them have it until he had paid a surprise visit to the house they were having to leave. But when he had seen the home, and the children of the Smiths, and had been introduced to one of our ministers who was staying there at the time, he willingly and gladly expressed his readiness to have such tenants.

Mrs. Smith was left a widow in 1859. In 1864 she removed to Middlesbrough, and became associated with our Linthorpe Church, where she rendered good service, and filled the offices of Society steward and class leader. In 1873 she came to Bradford. She joined the society worshipping in the old Philadelphia Chapel, and removed, with our people into the present Tennyson Place, when it was opened for worship.

In Bradford she has been of service to our cause in many ways. Her influence upon a meeting was always good and helpful. Her presence in a service was an inspiration.

During the past few years she has not been able to get to the services very much, but it has been a joy and help to meet her in her home. Her last days were very bright, a fitting end to such a life as she had lived. Faith, hope, and love, were ever hers. Though she often suffered great pain, she never murmured, but praised God in it all. And as she felt herself steadily failing her trust and confidence became stronger.

She passed away peacefully, and entered into her rest. We believe her Lord would say:
“She hath done what she could.”

Elizabeth was born to parents Richard, a tailor, and Mary Birch at Tadcaster, Yorkshire.

She was married to James Smith (abt 1815-1859), a brick and tile maker, on 25 December 1842 at Tadcaster, Yorkshire. Census returns identify six children.