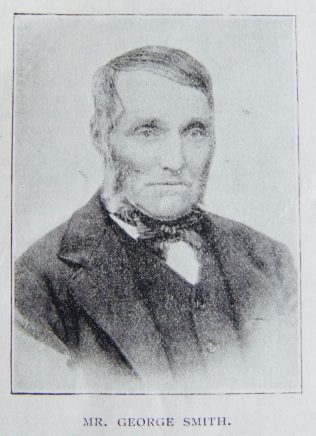 Transcription of Sketch in the Christian Messenger by Stafford B. Whitby

My father used often to say to me, ‘My lad, I admire the brilliant preacher, but remember, it is the patient plodder that has built up this Connexion we love so much.’ At that time it had not entered my thoughts to debate with my father, and though my silence may have seemed acquiescence, yet mentally I thought him wrong. But with years it has grown upon me that there was more truth in the dictum than appeared, and the conviction grows that, whilst I may be, nay am, proud of the brilliant preachers and eloquent platform speakers, yet I am fixed in the belief that the men and women who, often unknown beyond their own circuit or district, nay, perhaps their own society, are far more potent in the building up and extension of God’s cause than we dream; and though no great events may have marked their life, yet the diligence and regularity, as well as the permanence of their service, have made their labours monumental.

Mr. George Smith, of Audlem, in the Crewe circuit, whose portrait is here presented, is a worthy type of an old-fashioned, loyal Primitive Methodist, who, without expectation of earthly reward, has given for over half-a-century the best of his service to the cause of Gods and Primitive Methodism. He was born 75 years ago at Sound Heath, near Nantwich, and is a Primitive Methodist of the third generation. His grandfather opened his house to our first preacher round his home. Mr. Smith was a nephew of the Rev. John Smith, the celebrated and highly successful minister, so widely known in the Norwich District. Like most of us who give our lives to the service of our Church, he has filled many positions such as trustee, circuit and society steward, Sunday school superintendent, and class leader. It is however, in the latter capacity that he excels, and if any of the readers of this Magazine should find themselves in the Audlem Society, it would amply repay them to visit Mr. Smith’s class meeting, held every Sunday morning. Old-fashioned, ’tis true, but as a stimulus and help we have found few to excel it. Surrounded by others equally in earnest, equally loyal, it is a real delight to one whose whole life has been in the town, to spend here a quiet hour; for we not only catch the influence that is all around, but, what is so interesting and instructive, get a glimpse of that style that was so successful fifty years ago. For it is a real, down-right, old-fashioned class-meeting. Why, one of the members, Brother Abraham Whiston, has been converted over fifty years, and puts many a younger man to shame by his hearty singing and active exercises. Others there are also who have given many years’ service to the cause; so, no wonder the attendance is good and expectation high.

What a splendid thought it is that God is no respecter of persons! poor and rich, learned or otherwise, town or country, all may be filled with the spirit of God. And so these quiet, unassuming friends meet together and tell their plain, homely story of what God has done for them, and how little they have done for Him, and with closed eyes and praying lips the while, the leader listens, and then from his heart exhorts them to greater diligence to make ‘their calling and election sure.’ And though the phrases and sentences have become hackneyed, yet uttered by men whose hearts are full of God they come to us like inspiration from on high.

Ah! we owe more than we are willing to own to the unknown men and women who, labouring in out-of-the-way corners of our vineyard, help to build up a stalwart and robust Christianity. Mr. Smith has been wonderfully helped in all his work by his wife, whose self-sacrifice and love for our Church is well-known to all the ministers who have travelled in the circuit in which she has lived. Their son is a local preacher and society steward, and the four daughters are all members of the Church. What a deep and quiet joy it must be to this aged couple to know that all their children are converted and aiding in the advancement of God’s kingdom amongst men! Our visits to Brother Smith’s class-meetings have been a benediction, and we pray that for him many years of service may be vouchsafed, and that when the summons from his Master comes, he may, like St. Paul, say ‘I am ready.’

George was baptised on 17 April 1825 at Wrenbury, Cheshire. His parents were William, an agricultural labourer, and Mary.