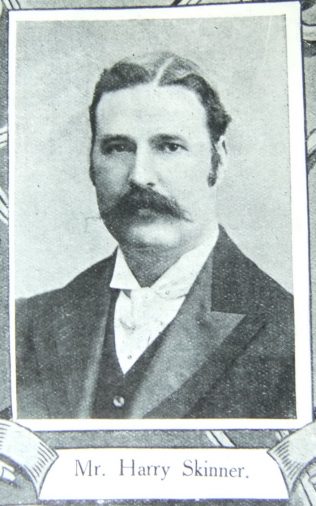 Mr. Harry Skinner, like his parents, is a life-long Primitive Methodist, and he attributes much of his religious life to parental influence, in the village of Over, St Ives Circuit, Hunts.

He is a man of considerable business talent, which is readily placed at the service of the church. As a superintendent for the Prudential Assurance Co. he is regarded as most efficient. For four years he was a Councillor for the Borough of West Newington.

Mr. Skinner has been on the Plan 17 years. He is treasurer to the Northampton Park Trust, and as such reduces the minister’s anxiety about the Trust to a minimum. He is beloved by the whole Circuit, and carried much influence in business meetings, and his opinion is frequently final.

Being on the sunny side of forty there is every prospect of the church enjoying his services for many years to come.

Harry was born abt 1868 at Over, Cambridgeshire, to parents William and Alice. William worked the land. Older brother, James, became Vice-president of Conference in 1924.