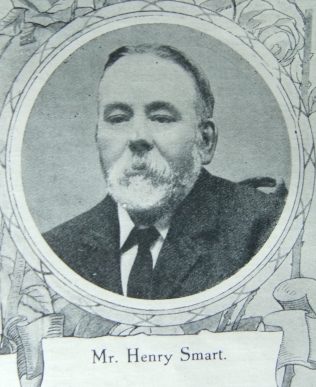 For forty-two years Mr. Henry Smart’s parental home was the Primitive Methodist Church at Littleworth, Faringdon Circuit. When the time came to build us a church his mother laid a stone. At about twenty-one he came to Oxford and before long courageously began business in the Market. God’s blessing has signally crowned his exertions.

Though not a member of our Church at the time, it is no wonder that he sought out the “Primitives.” Under the genial ministry of Rev. G. E. Butt he was “folded,” and soon became useful. He is a Local preacher, Class leader, Band of Hope President, and Circuit Steward. He is a regular attendant at the early Sunday morning prayer meeting; a tactful open-air worker and sick visitor. Not least, he and his excellent wife are blessed with a large and promising young family. May they all follow in parental footsteps!

Henry was born abt 1853 at Littleworth, Berkshire, to parents James and Elizabeth. James worked the land.