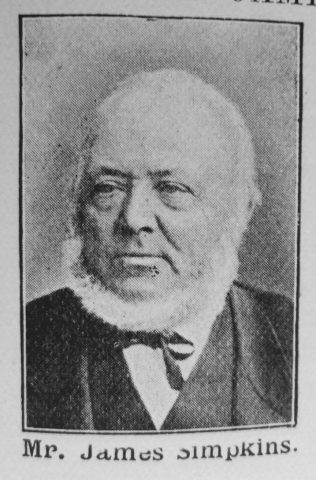 Transcription of Obituary in the Primitive Methodist Magazine by George Seaman

Was born at Tottenham, Wilts., February, 1820, and was called by the Master to his eternal rest August 1st, 1902. Our brother was converted to God in early life, and enjoyed a blessed experience of the Divine favour until he was summoned home. When he was eighteen years of age he removed from the place of his nativity to Chippenham, where the late Rev. Samuel Turner had just planted Primitive Methodism, and the results of his inspiring ministry attracted and won the young man for Christ. One Sunday afternoon the youth was convicted of sin, and this was soon followed by conversion and Church membership. The Circuit authorities saw in him the prospect of usefulness, and he was soon sent forth to bear the message of love and life to the people. More than sixty years ago, this involved arduous labour, many appointments and often very long journeys. But our brother had great joy in his work, and delighted in spending two Sundays out of three in telling the “old, old story” to his fellow men – many of whom he saw led to the Saviour. He was very happy in the domestic relation he entered into at the beginning of his preaching career. His wife, who had been saved under the Rev. S. Turner’s ministry, stimulated him to service with encouragement and cheer. In times of darkness and trial her work ever pointed to steadfastness and hope. “Be faithful and fear not, our duty to God first.” This advice he received and followed. His preaching was a power for good, and it was an inspiration to hear him in the days of age and sickness talk with enthusiasm and joy of the blessedness of service he had enjoyed during a long life. Nearly forty-two years since he removed ton Reading, and instead of waiting to be found out, immediately joined our Church in Minster Street, and removed with that Society when its headquarters became London Street. When Friar Street Chapel was opened he threw himself heartily into the new effort. When his health failed he was necessitated to remove to another part of the town, where he joined our Cumberland Road Church. It was a sore disappointment to him when his seat in the Sanctuary had to be left vacant on account of infirmity, but his interest never failed in the work the Church was doing in saving soul and uplifting the people. Almost the first question to the writer on his visits invariably was in reference to the progress of the work of God in the station. Sometimes he would say “I have been tempted of late that I do nothing for the Lord now, but I can, and do, pray for them upon whose shoulders has fallen the work to be carried on for my blessed Master.” His faith in God was strong. No wonder that he maintained to the end a sweet and cheerful disposition. His life was marked by trust in Christ, by the assurance which gave him a clear and definite Christian experience, and by the hope undimned and triumphant of eternal glory. The Rev. G. Seaman, assisted by the Rev. F.W. Norris, conducted the funeral service in the presence of many sympathising and loving relatives and friends. Over eighty-two years of earthly sojourn, with more than sixty-two years of Christian life and service are now completed in the light and joy of heaven. There may his widow and children meet him again!

James was baptised on 7 May 1820 at Lyneham, Wiltshire. His baptismal record identifies his parents home as Tockenham, not Tottenham, Wilts. His parents were Moses, a labourer, and Betty.