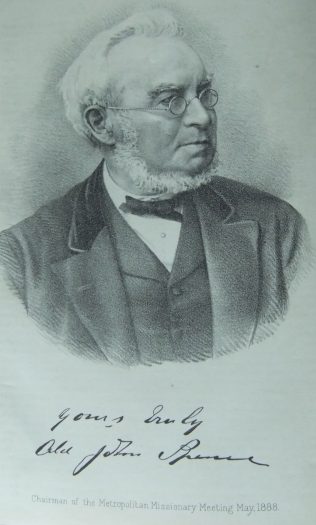 John was born on 9 July 1816 at Percy Main to parents Roger Spence and Jane Attis.. His father was a miner. He was one of 17 children and was sent to work in the coal pit as a trapper boy aged 9.

In 1828, Primitive Methodists missioned Percy Main and John attended service at Henry Wonder’s house. He was one of the first scholars at the PM Sunday School that opened in 1829. John was converted at the age of 14.

At the age of 21, John left the pit to set up a small drapery business in his village. He remained at Percy Main until 1845 and then moved to North Shields.

Whilst at Percy Main, John was a class leader and Sunday School Superintendent.

John’s drapery business prospered, as did his position in society. In 1864 he was elected Guardian of the Poor. In 1870 he was elected to the Borough Council. He was mayor of North Shields in 1881 and elected an Alderman in 1884. Today, there is a John Spence Community High School in North Shields

John was generous in the building of the Saville St church in North Shields. He was station steward for many years and representative to the District meeting. He attended conference on several occasions.

John was active in securing the Theological Institute at Sunderland and served as a Trustee. He was also a director of the Connexional Insurance Company.

John was Chairman of the Metropolitan Missionary Meeting in 1888.