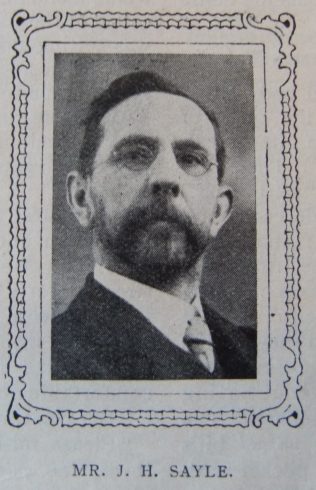 JOHN HENRY SAYLE, Society steward of Victoria Bar, York II. Circuit, was born at Stainforth, near Doncaster, in 1856. He had the inestimable blessing of Godly parentage. For thirty-five years he has been in membership with our Church. Removing to York twenty-five years ago, he threw himself with characteristic energy into the work of the Victoria Bar Church. Undismayed by its immense difficulties, he loyally joined the noble band of officials who stood by the cause. Bro. Sayle has served the Church in many capacities with credit and distinction. For nineteen years he has filled the important post of Society steward, but the work of his life, the work for which he is specially gifted, and in which he has achieved splendid success, is that amongst the young. For thirty-five years he has given his best to Sunday School work; during this time thousands of children have passed under his personal influence; he is greatly beloved by all the children, and many old scholars, now settled in life, speak of him with real affection when they recall the days of childhood. He is at present the Superintendent of Victoria Bar Sunday School. He has gathered around him a splendid staff of teachers. Bro. Sayle is deeply interested in the church, a diligent Steward, anxious for the prosperity of the church, a devoted worker, ready and willing. He has been delegate to the District Meeting, a representative on the District Sunday School Committee. He is a loyal supporter of the Connexional Funds. We wish for him many years of service. He has been well supported in his work by Mrs. Sayle. She has ever been ready to speak a word of encouragement to him.

John was born to parents John, a grocer, and Martha. He worked as a draper. The family moved to Goole before the time of the 1861 census.