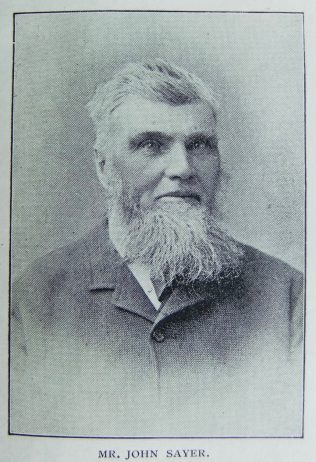 Transcription of Sketch in the Christian Messenger by R.F.B.

In many of the older Circuits there are to be found a few brethren who have seen everything worth remembering in their Circuits, from the early days of persecution and hardship to the present days of successful organization and modern spiritual movements. Thetford Circuit has the honour of having some half dozen of such aged worthies, and Mr. John Sayer, of Shropham, is one of them. He is the youngest of the group, and, although his number on the plan is four, he is only seventy-six years of age. In early life he gave himself to the service of Jesus Christ, and for more than forty-four years he has been a local preacher. He has been connected with the Sunday school for about the same number of years, and his latest attachment is to the Christian Endeavour.

The prominent trait in Mr. Sayer’s life is that of Christian constancy. He has had a life-long association with a small society in a parish that is every year drained of its young men and maidens. He has been in all its revivals, he has watched the many changes that have taken place, and not infrequently felt somewhat at a loss to know how the village cause was to survive the heavy removals. But by a wonderful constancy of purpose he has held on, and kept the fire burning in the hearts of the remnant of God’s people. Mr. Sayer’s home is the oldest “preachers’ home” on the Circuit. He has entertained in his humble cottage more ministers than any other friend of Primitive Methodism in the Circuit, and the preachers are more welcome to-day than ever. His noble wife spends her life in a ministry of comfort and kindness to all her husband’s friends.

A good deal has been written and said about village Methodism, but if every village society had a man of the type of Bro. Sayer the problem of leakage would be solved. Shropham society is not controlled by one man to the exclusion of others, but by the one man’s regularity, constancy, and devotion the members never lose heart. The class meeting of more than 50 years’ standing is still a living power. The Sunday school has a similar record of industrious life. And all kinds of weather religious services are held, preacher or no preacher. Such consistency of purpose is the admiration of the world.

Another strong point in Bro. Sayer’s character is his practical spirit of helpfulness. He is a disbeliever in all systems of promise; that is, he never makes a promise to do something a month hence. What he does he does at once; he never makes long engagements, but lives his best and does his best in each day as opportunity affords. He is the happy possessor of a spirit of promptness, and as long as his life is spared he will always be present in the services in God’s House. To have such men in a struggling and feeble society is to have a guarantee of sustained life and vigour. Humbleness of mind, Christian constancy, purity of motive, promptness, kindness, faith, these are our friends virtues. He is still in possession of good health, and we wish for him a long service yet in order that the little chapel in the remote village of Shropham may be blessed with his ministry of love and noble deeds.

John was baptised on 8 April 1827 at Snetterton, Norfolk. His parents were Thomas, a miller, and Mary.