A Grand Old Man of Cullercoats 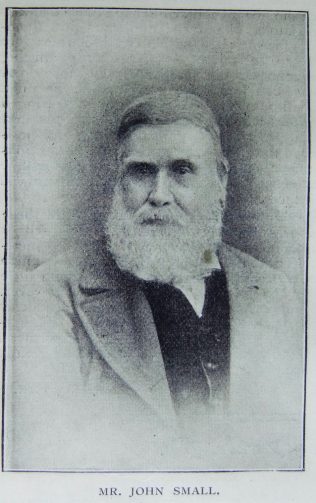 Transcription of Sketch in the Christian Messenger by J.S. Nightingale

The hardy fisher folk of Cullercoats are known almost all the world over, and no face is more familiar amongst them than the subject of this brief sketch – our friend, John Small. Not a fisherman himself, he has, nevertheless, amid their joys and sorrows, gone in and out amongst them for many years, and is a highly-esteemed figure in this quaint fishing village on the North-East coast. The fact that he celebrated his 86th birthday last November, and that so many of these years have been devoted by him to the interests of noble causes, fairly entitles him to the  description of a “grand old man.” Born on “Guy Fawkes Day,” his watchword for a long period now has been, “The overthrow of the evil and the building up of the good.” The agencies through which his efforts have been made have been chiefly Primitive Methodism and the temperance cause. Though a native of Sunderland, for a good many years he has been closely associated with our church at Cullercoats, and as a plodding, faithful worker in its several departments, his record is a most honourable one. His time, money, according to his means, have been freely given to the service of the sanctuary, and when younger Primitive Methodists would have stayed indoors on stormy days, this old veteran – though having a steep. Bank to climb in order to come to worship – in his love for God’s House, would be found in his place. His home will be cherished in the memory of many ministers and laymen as one of the bright spots during their visit to Cullercoats, as hospitality of no mean kind has been offered from time to time by himself, his good wife, and daughter. One of his ambitions, that of seeing a more commodious church erected, has been realised, and the “fisherman’s chapel,” as some people call it, is a structure of which Primitive Methodism may well be proud. It is one of the joys of Mr. Small to have been closely associated with the late George Dodds, whose name in connection with temperance work in the north of England is as ointment poured forth. For many years they were intimate friends, and as Primitive Methodists and temperance reformers stood shoulder to shoulder in the fight against evil. It is interesting to note that, so far back as 1835, our friend listened to the famous Joseph Livesey deliver his malt liquor lecture, and on that night, eighteen months before our late Queen ascended the throne, he determined to be an abstainer. From that moment, 67 years ago, not a drop of intoxicating liquor, as a beverage or medicine, has passed his lips, and as the eventide of his sojourn on earth draws nigh, from the rich benefits of abstinence he may well say:
“ Now, my old age is as a lusty winter,
Frosty, but kindly.”

He signed the pledge when it was generally considered suicidal to attempt manual labour without drink, but although his calling as an ironmoulder was no sinecure, he vindicated his temperance principles. Doctors have sometimes prescribed intoxicants, but never yet have been able to persuade John Small that such medicine was a necessity, and no doubt will not soon forget the courteous lecturing he has given them as medical men, with a great responsibility resting upon them in these matters. And now, verging on ninety years, our ruddy-laced old friend is a living epistle of the unspeakable benefits of abstinence.

Until very recently he has regularly followed his employment as the superintendent of the salt water baths, and although not so equal to the task as of yore, is still doing a little, his vitality the wonder of all who cross his path. That this quiet, unostentatious, yet loyal and faithful toiler in the Master’s vineyard may yet be spared for a few remaining years, and that they may be rich in peace and joy, is our earnest hope and prayer. We thank God for such a life, and no one will deny this brave old Christian a tribute of honest praise and recognition so richly merited.

John was born on 5 November 1816 at Sunderland, Co. Durham. His parents were John Small and Sarah Young.

John married Margaret Ann Hart, a widow, (abt1846-1916) in the summer of 1879 at Cullercoats, Northumberland. Census returns identify one child.