Of Stockton on Tees 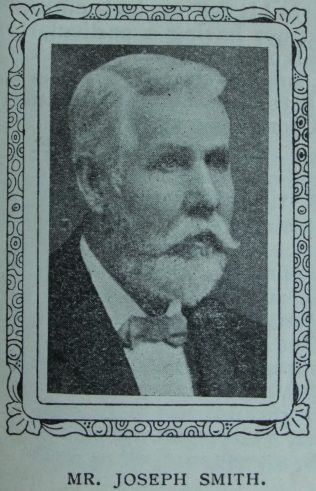 Mr. Joseph Smith, of Stockton, is a native of Morton, a village in the Ripon Circuit, where his parents, loyal Primitive Methodists, on 12s. a week, maintained a large family, and made a home for the travelling preachers. Reared in such an atmosphere, a boy could never be happy unless engaged in Christian work, and at sixteen he made the great surrender. Five years before this, however, he had begun to work for his living, and one day, as he was pulling thistles in a field with good old George Foster, he saw him receive a telegram calling him to Conference to take his seat as a Deed Poll member. Mr. Smith began preaching in 1865, but it was not until four years after that, at the instance of Joseph Spoor, he was placed on full plan at Stockton. Possessing a fine presence and a fluent utterance, and withal being a man of deep religious feeling and considerable grasp of mind, Mr. Smith soon distinguished himself in this position, and now, after a service of thirty-eight years, his powers are unabated and his welcome is as hearty as ever. Mr. Smith has always been an ardent worker amongst the young. For twenty years he was superintendent of Paradise Row School and from his society class many young men have passed into positions of usefulness, five of them now in the regular ministry. In Circuit and district affairs Mr. Smith takes a leading part, and is now District Sunday school treasurer and a member of the Local preachers’ Training Committee.

Joseph died in early 1916 at Stockton on Tees, Co. Durham.