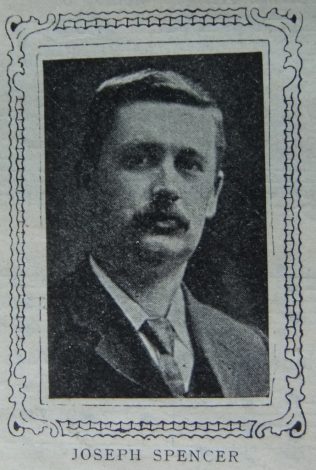 Mr. Joseph Spencer was born in 1872 and converted in 1901. Since then he has been a loyal Primitive Methodist, and has sought to be a faithful servant of Jesus Christ. As a youth our friend went in for various forms of pleasure very freely, and some of those days he remembers with sincere regret. Now he knows from experience which is the best life to live, and he is seeking to bring honour to the Master he loves.

About five years ago Mr. Spencer was appointed steward of our Normanby Society, in the Easton Circuit, and has maintained the confidence of the church during that time. As a steward, he is not only attentive to his duties, but he does his work in a way that makes it a pleasure to work with him. He loves his work and takes pride in it, and does it for the best Master he can serve.

Unless unavoidably detained, he is in his place to greet the preacher on the Sunday morning, and helps to inspire him for his work. Our people work very heartily with him, for he has won the respect and love both of old and young. There are sometimes difficulties and discouragements in the working of a small church such as ours, but the cheerful optimism of our Society steward helps us to overcome them; and no man more readily acknowledges the work and worth of other members of the church.

Our brother is still in the full vigour of his early manhood, and we hope for him many years of usefulness. He was never held in higher esteem, nor had the confidence of our own people and others more than he has to-day, and we believe he will do even greater service to our Lord and His Church in the days yet to come.

Joseph was born on 15 August 1872 at Middlesbrough, Yorkshire, to parents Herbert and Elizabeth. Herbert was a boilersmith. Joseph was baptised on 8 September 1872 at St John, Middlesbrough.

Joseph followed his father as a boilersmith.

Joseph died in late 1937 in the Cleveland Registration District, Yorkshire