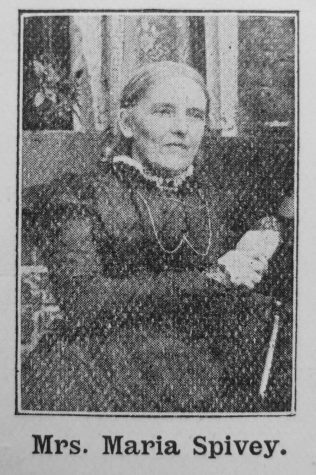 Transcription of Obituary in the Primitive Methodist Magazine by Wilson Barrett

Maria Spivey was born at Winster, in the county of Derby, April 2nd, 1839, and departed this life at Maryport, Cumberland, February 12th, 1902.

Her parents were members of our Church, almost from its origin. She gave her heart fully to God when about 15 years of age, and at once joined the Church and remained a member to the end of life. From quite a little girl she collected funds for the missionary cause, and in her teens became a Sunday-school teacher. Her parents’ home being a resort for the preachers, both travelling and local, she had a vivid recollection of some of the old preachers. She would speak with evident pleasure of Beckerlegge, Booth, Hurd, Watts and Price, who helped her in early life by their conversation, prayers, and ministrations.

Mr. W. Spivey made her acquaintance in 1866 when travelling in the Minster Circuit and they were married October 31st, 1867, and for 34 years she has shared the joys and sorrows of a Primitive Methodist minister’s life. Both in the home and in the church she was a real help-mate to her husband. “She commanded her husband in equal matter by constant obeying him.” “She did him good and not evil all the days of her life.” She was a refined woman, well-read,‘ deeply religious, and profoundly moved by the truths of the Bible. Her home life had a halo of glory about it. Her influence over her children was one of the finest elements in the formation of their character. “She looked well to the ways of her household; her children arise up and call her blessed; her husband also, and he praiseth her.”

She was like a mother to the young ministers who travelled with them. The Rev. W. Fidoe of Laxey says: “I gratefully recall the many happy hours spent at the home over which she exerted such a gracious influence. My introduction to her was the beginning of a friendship which continued until her death, and will be renewed in heaven.”

“I soon found out what a, beautiful spirit Mrs. Spivey was,” says the Rev. S. L. George, of Haslingden, and I very soon fell under the spell of her influence. Her home was always open to me and there was ever a word of welcome and a smile. I can feel her influence upon me still, inspiring me with a stronger faith in God and humanity. In the home she was a true mother, well worthy of the love, obedience and reverence which her children gave her. I thank God that I have known her.”

“In her presence,” says the Rev. John T. Ridley of Prestwich, “I was soon made to feel at home. Next to my mother no other woman has so mightily influenced me.”

Mrs. Spivey also took a very lively interest in the financial and spiritual affairs of the church. She more than seconded her husband’s efforts in all their circuits, and her name is as ointment poured forth. She loved the house of God and delighted to be present both at the public and private means of grace. Her place was never vacant either on Sunday or week-day when health permitted her to attend. She loved the class-meeting and was always there. Mr. Cole, of Ripon, says: “That her presence and experience at the class-meeting always inspired and encouraged him and the other members of the class.” Many young persons found in her a kind and sympathetic friend, and have, in numbers of instances confided their difficulties to her; and they found her counsel most timely and trustworthy. “I cannot forget,” says the Rev. B. Senior of Ramsgate, “her kindness to me over 30 years ago when a poor boy at Burncross; she often gave me a word of cheer and encouragement. Her quiet and exemplary and holy life was a blessed inspiration to all about her, while her testimony in the class-meeting was always helpful.”

At Colne she started a young woman’s class which was very successful. At Alston she conducted a young women’s Bible class most efficiently.

Her health broke down on the Donnington Circuit, and she has never been the same woman since. “In sickness let me not so much say, am I getting better of my pain, as am I getting better for it!”  Mrs. Spivey got better for it. She walked on a higher plane. It brought her into closer touch with Jesus Christ and His Church. It broadened and deepened her social and religious sympathies.

Mrs. Spivey was an angel among the suffering poor; had one a burden she would gladly carry it; had one a grief, in her own breast she would willingly share it. She went about doing good.

The last six months of her life were full of storm. In October last her eldest son, Willie, who had won for himself a distinguished and honourable position in the University of Cambridge, and who was respected and beloved by all who knew him, was called home through an explosion after twelve days suffering. This unexpected blow almost stunned her; for Willie was the joy and pride of her life, and inherited much of her quiet and unselfish disposition. In less than a month after she had lain Willie to rest, she was summoned to the sick-bed of her youngest son, Harold, who, after a week’s illness, sank into the repose of death. “I do hope I shall not lose my faith in God,” she said as we carried her youngest son to the grave. Poor dear woman! she seemed frightened, bewildered, lest she should lose her way.

Time is generally the best doctor in such cases, but it cannot bind up a broken heart. With care and attention she recuperated wonderfully, and began to be like her old self again in the home, though somewhat weak in body.

On Saturday, February 9th, her brother, the Rev. George Newton, came to Maryport. He preached there on Sunday evening, and Mrs. Spivey was present to hear him. On Tuesday following she was busy all day preparing material for a sewing-meeting to be held the next day. Her brother and Mr. Spivey went out to a Missionary meeting at Ellenboro’, and on their return the family took supper together, after which, she and her brother conversed in a cheerful mood about their early days and the people of “Auld Lang Syne.” About midnight they retired to rest, without any idea that death was going to throw his “fatal shaft.” On getting into bed Mrs. Spivey was seized with a choking sensation; her heart ceased to beat, and her spirit took its flight to the light and glory of the redeemed in heaven. She died in harness, and ceased at once to work and live. We mourn that she has been called from her loved ones here, yet we cannot but feel some degree of thankfulness that she is at rest after all the pain and grief and loss of these past few months. We laid her by the side of her loved ones, in Colne cemetery.

At the request of the Nonconformist ministers of the town, a united memorial service was held in our chapel at Maryport, on Sunday, March 9th, and the writer gave an address. It was an impressive service.

Maria was born at Winster, Derbyshire to parents William Newton and Hannah Titterton. Her parents were both Primitive Methodists. William was a lead-miner and local preacher.