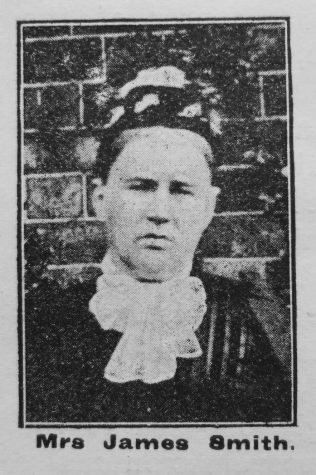 Transcription of Obituary in the Primitive Methodist Magazine by R Thompson

Another inroad has been made into the Society of Epworth, by the death of Mrs. James Smith, who exchanged mortality for life on January 9th, 1903, at the age of seventy-two. She only survived her husband – the late Mr. James Smith – (to whom she had been married nearly fifty years), for a brief period.

From girlhood Mrs. Smith had been connected with the Society at Epworth, and with her husband always manifested the greatest interest in its welfare. Their home for many years had been open for the hospitable welcome of ministers and local preachers. The great respect in which she was held was testified by the large number that attended the funeral, and the numerous letters of sympathy that were received from ministers and other friends from various parts of the Connexion. Her sufferings towards the end, though severe, were patiently borne Many times she expressed a desire to depart and to be with Christ. Her mortal remains were laid by the side of her departed husband in Epworth Cemetery, and a memorial service was held on Sunday, January 25th, conducted by Rev. R. Thompson, circuit minister.

A son and daughter survive to mourn their loss. May the God of comfort and hope be richly theirs.

Mary was baptised on 13 June 1830 at Epworth, Lincolnshire. Only her mother’s name, Ann, appears on the record.