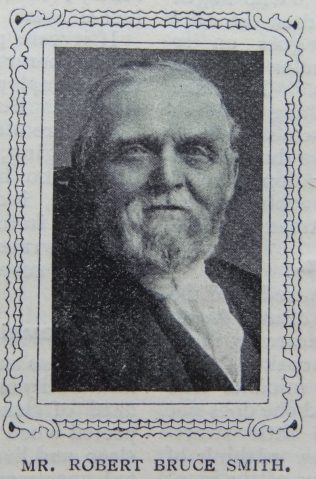 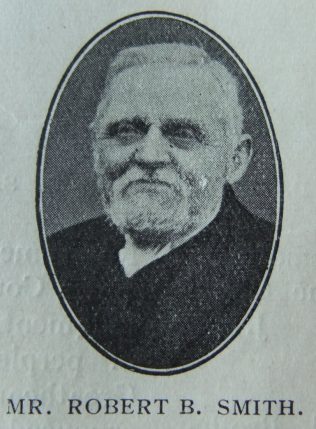 Robert Bruce Smith was born at Drux, in the East Riding of Yorkshire, in 1825. He was converted to God in early life and joined our church just sixty-one years ago in his native village which had just been missioned by the late Rev. J. Garner. Through these long years Mr. Smith has been closely connected with our cause, attending other churches only where he resided where our church had no existence. In his early years he was most intimate with some of the veterans of our church. He delights to speak of such men as the sainted John Petty, R. Smith and R. Tanfield, whose influence did much to shape his life. Some thirteen years ago Mr. Smith came to reside with his eldest son, Dr. Bruce Smith, Principal of Ealing Grammar School. He at once joined our church, and for the past ten years has been a most devoted Class leader. It is not surprising that our brother retains much of the religious ideals and phraseology of an earlier time, John Garner and John Petty were men of robust character and of high spirituality. They had known what persecution was; their religion had been developed amid the stern conditions which prevailed sixty and seventy years ago. The trials and persecutions and hardships of those days developed a robust type of religious life, and made men with an abiding sense of the spiritual world, and a reliance on the power of God which was one of the great secrets of their success. It was by such men that our brother was trained. He belongs to the old type, he believes that converted men and women should have an experience, and be glad to express it.

Though over eighty-two years old he is most regular and punctual at his class. He feels the burden of his years, but as he says in his experience he is “already packed up and waiting.”

His obituary records that for many years Robert was associated with the Ebenezer Church, York. Later circumstances led him into Lancashire and South Wales before he settled at Ealing.

Note: Records after 1891 record the surname as Brucesmith for Robert and Benjamin.