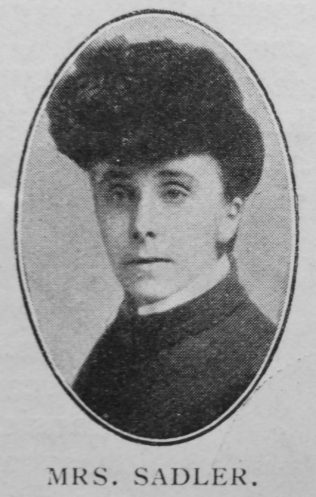 Transcription of obituary published in the Primitive Methodist Magazine by Geo. Lee

A serious loss has been sustained at Haslington, in Sandbach Circuit, by the death of Mrs. Sadler. She  was born at Cholmondely, June 26th, 1854, of pious parents, from whom she received a Christian training. Unfortunately her mother died when she was very young. Although residing two miles away from our chapel at Chorley, in the Nantwich Circuit, she was seldom absent from our services weekday or Sunday, and while in her teens she became a member of our Society.

After her marriage she and her husband came to reside at Haslington, and for upwards of twenty years theirs has been an “open house” for our preachers, both on special and ordinary occasions. Until laid aside by sickness our sister rendered invaluable service as a missionary collector.

Her last illness, though brief, was most painful and trying. This she bore with exemplary patience, and not only patiently submitted to the divine will, but meekly acquiesced without a murmur. On November 4th she passed peacefully away beyond the shadows of earth to the home of the glorified. The interment took place at Haslington, and on the following Sabbath an “In Memoriam”service was conducted by Rev. G. Lee, in the presence of a large and deeply sympathetic audience.

She married Ephraim Sadler (1857-1937), a blacksmith (1901), in the spring of 1887 in the Nantwich Registration District, Cheshire. Census returns identify three children.