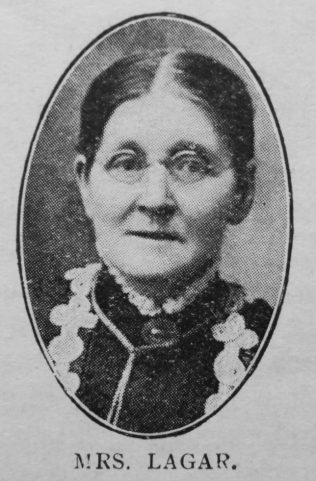 Transcription of obituary published in the Primitive Methodist Magazine by Wm. Sawyer

The Central Hall, Bradford, has suffered a serious loss by the death of Mrs. Lagar. Mrs. Lagar laboured to do good up to the full measure of her opportunity. She was born in Bradford some sixty-eight years ago, and was baptised in Manchester Road Chapel. If at the time she had been able to vow to serve the Lord all her days, she could scarcely have done it more completely. She was not only a scholar in the school, but a member of the Church, and a singer in the choir while quite young.

Her character was summarised in rather quaint but expressive phrase by one of her friends thus—Mrs. Lagar was a noble soul. She was not jerry built, but sound from foundation to pinnacle. Few equalled, much less excelled, her in all-round consistency and perfect reliability. She loved to do the work of her Church.

For some years the exigencies of life took her to Pemberton, in the Wigan Circuit, and although she has been back in Bradford for fifteen years, the fulness and faithfulness of her Christian life is still a cherished memory at  Pemberton, where she was the President both of the Women’s  Christian Association and the British Women’s Temperance Association. If some new movement required initiation, Mrs. Lagar’s faith and courage were equal to it; if it needed persistent labour—sheer drudgery—for its maintenance, she could be depended upon to perform it.

It is believed that the depth of her sympathy with other persons’ troubles seriously injured her health. On August 28th, 1909, the summons came. She died, as she had lived, humbly trusting in her Saviour, after a few weeks of illness, during which she enjoyed the reward of the faithful wife and loving mother in the ceaseless ministrations of the husband and children, who now mourn her loss.

Mary was born in the spring of 1841 at Bradford, Yorkshire, to parents James Forrest, a wool comber (1851), and Nancy Forter.

Note: The surname is Sagar, not Lagar as printed in the obituary.