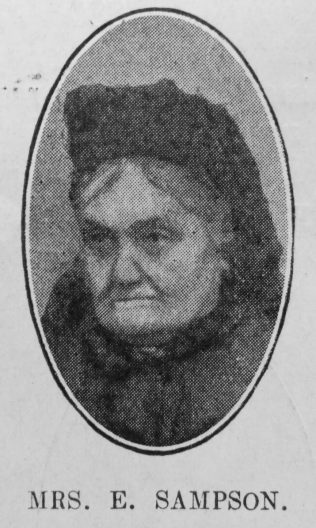 Transcription of Obituary published in the Primitive Methodist Magazine by J.H. Howlett

MRS. ELIZABETH SAMPSON, born June 29th, 1816, was connected with our Society from its earliest days. For four years, prior to the erection of the present chapel in 1835, she collected money to pay the rent for the “Old Salt House,” where the Society first held its services, and afterwards journeyed to and from the shore, carrying sand up the cliff in her “cawall” to aid in the building of Ebenezer.

Mrs. Sampson, notwithstanding her great age—she died May 5tb, 1909, in her ninety-third year—enjoyed remarkably good health and retained her faculties unimpaired to within a few days of her brief illness. Always bright and cheerful, deeply interested in the work of the Lord, it was a great joy and real spiritual refreshment to visit her. Her utterances were always toned in the spirit of thanksgiving, almost her last utterance being, “Praise the Lord.” The Bible was ever an open book to Mrs. Sampson. She knew what it was to “search the “Scriptures,” and to find in them words of Eternal life. She had often read the Bible through, and had just finished Revelation once again” when she was laid aside.

Keenly interested also in the proposed New Scheme, she has often asked the writer, “Do you think I shall ever see the new chapel?” This earthly joy was not granted to her, but she has entered the heavenly building which God has provided for her, a house not built by human hands, but eternal.

Elizabeth was born on 29 June 1816 at Newlyn, Cornwall, to parents Barzillai and Elizabeth. She was baptised on 1 December 1819 at Paul, Cornwall.

Elizabeth died on 5 May 1909 at Newlyn, Paul, Penzance, Cornwall.