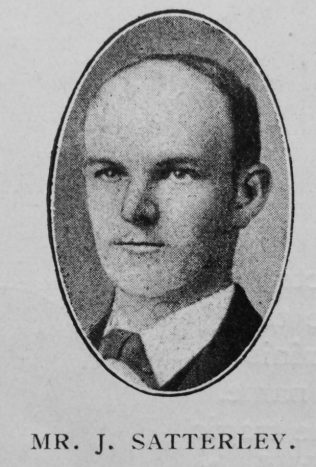 The friends of Hirst Church and the Ashington Circuit were much shocked to learn on May 14th that Bro. Jas. Satterley had that afternoon been killed in the Ellington pit while hewing coal.

Born in Cornwall forty-two years ago, Bro. Satterley removed to Co. Durham when eleven years old, and came to Hirst in 1911. Converted under the influence of the Salvation Army, he came on the plan in the Thornley Circuit, and has filled the pulpits of all the circuits where he has lived with great acceptance.

He found his way to our Hirst Church the day after his arrival in the district, and his winsome presence and loyal service gained him the love of his brethren. The Church is the poorer for his loss. His memory will long be fragrant.

A funeral service was conducted by Revs. W. Pickering, J.F. Loveday, and Mr. W.H. Hughes in the Hirst Church prior to the interment at Shadforth. The widow and seven children are left to mourn his loss.

James was born abt1870 at Redruth, Cornwall, to parents William Warren Satterley, a miner, and Philippa Hancock.

James died on 14 May 1912 at Ellington, nr Ashington, Northumberland.

The UK, Coal Mining Accidents and Deaths Index records the following; “When filling machine cut coal in a heading 7 ft. wide, stone came away at a slip which had been noticed. It is probable the timber had been neglected.”

Note: There is a discrepancy in the date of James’ death in records. The obituary and probate record give a date of 14 May. The Coal Mining Accidents and Deaths Index give the date as 2 May.