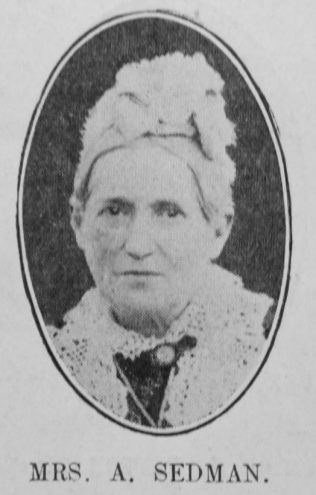 MRS. ANN SEDMAN, of Pickering, was one of those kindly women whose character and service contribute the best elements in church life. A native of Pickering, she died in the town of her birth on April 14th, 1909, in her seventy-second year. Ailing for years, she resolutely fought against oncoming weakness, and sat up even the day the end came. Originally a Wesleyan, she joined the Primitive Methodists on her marriage with Christopher Sedman, the respected society steward of Pickering Church. She took an intense interest in all that concerned the cause, and without her home ministry her husband would never have been able to devote the time he has done to church affairs. Almost her last concern was for the four delegates she had promised to entertain at the forthcoming District Meeting, which, however, she did not live to see.

Amid every token of esteem the remains were laid to rest in the Pickering Cemetery, after a memorial service in the chapel conducted by Rev. T. Graham.

Ann kept house for her father, who died in 1886, before her marriage.