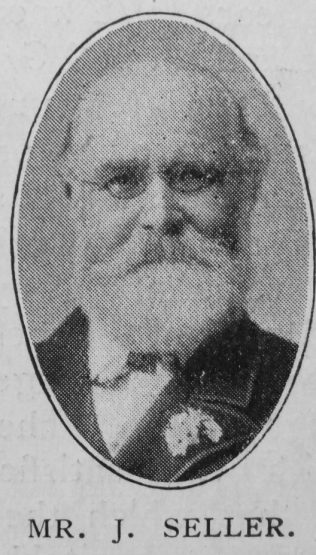 Transcription of obituary published in the Primitive Methodist Magazine by W.A.H.

In the midst of a vigorous manhood Johnson Seller, of Hull, was called to rest on Tuesday, January 24th, 1911. Born at Langtoft, Duffield Circuit, November 1st, 1846, he was converted in early manhood, and for fifty years gave himself unstintedly to Christian work. His was an ardent, generous nature. Rest in idle inactivity he could not; saved himself, he felt he must save others.

The little chapel was three miles away from his home and work, but at seven o’clock on Sunday morning he was there. Johnson Seller’s prayer was in itself a means of grace. He was early called to the plan as a Local preacher, but he never felt the pulpit to be his place, and on his removal to Hull found spheres of labour far more congenial to him. He was a born “shepherd of the flock,” an ideal Class Leader, and a fine, Sunday School Teacher and Superintendent.

His first associations in Hull were with Thornton Street Chapel, and subsequently with Jubilee, where for 35 years he did faithful and persistent service. No day was too long for him in the service of the Church. What Sundays his were: Morning School and afternoon Class. The preacher never knew his seat to be vacant morning or evening, or his voice to be silent. Evening found him in the open air for mission work in street or terrace, and when the evening prayer meeting came Mr. Seller was there with earnest importunate pleading for others. His was a fine life; diligent in his business, but fervent in spirit he joyfully served the Lord.

After forty years in strenuous business he retired, and after thirteen months of restful service God called him home. He was exceptionally blessed in his home life. His influence made the home sweet.

He married Sarah Ann Nurse (abt1849-1879) on 23 September 1871 at Eastrington, Yorkshire. Census returns identify one child.