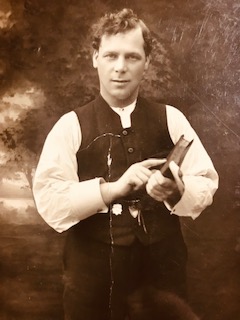 Albert Shakesby gave an accout of his life in a book published in 1910- “From Street Arab to Evangelist- the life story of Albert Shakesby, a converted athlete.”
The account tells how on January 9th 1904 he (a very wicked and outrageous man) went into Great Thornton St Primitive Methodist chapel Hull to disturb a meeting, but felt compelled to return on January 13th, so that at 9.25 on this latter date he was on the penitent form. He said he was ‘no edicated man, but I know the Lord has saved me.’ He regarded that chapel as his ‘spiritual birth place.’
With a struggle to pass the PM tests, he was eventually engaged as a lay worker and much of his spectacular evangleism was in and around Hull.
Noted for strength and physique, he suffered a major injury which effectively crippled him when trying to catch a falling man from a fire at Beverley.
However in many ways the climax was when he travelled from Sileby in Leicestershire to Mow Cop, and was amazingly and publicly healed at the Mow Cop Centenary Camp meeting in 1907.