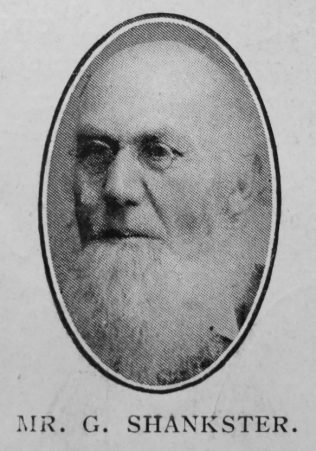 For over fifty years George Shankster was one of the best known men in Grimsby Primitive Methodism, and the associations of his family go back to the beginnings of our Church. His grandparents opened their house at Ousefleet in 1819 for our preachers. His father—Edward Shankster—was a local preacher for 33 years.

Born at Howden Dyke, East Yorkshire, in May, 1825, George was converted as a boy, and became a member at West Street, Hull. In early manhood he came to Grimsby, and after a time he took up an agency for the Royal Liver Friendly Society, ultimately becoming the district superintendent.

He became a Local preacher in his youth, and never shrank from the longest journeys, often not reaching home until the early hours of Monday morning, and going to his work at six o’clock. A rousing preacher, he was in great request for camp meetings. He was a Trustee of all the chapels in the Circuit. A generous supporter of his Church, as his income increased, he gave more largely to the various funds, and was often successful in begging considerable sums. As chairman for public meetings, and for opening of bazaars, he was in continual request. He was a Class Leader for half a century, and exercised a watchful oversight upon his members. If one was absent twice, the Leader would be at the house next day to know the reason. He often added a substantial donation to the class moneys, so as to take a large contribution to the Leaders’ Meeting.

He died on Jan. 2nd, 1909. Of his family, the son and one daughter (Mrs. J. C. Wright) are members of Flottergate Church, and his other daughter is the wife of Rev. George Bennett.

George was born in 1824 at Howden Dyke, Yorkshire, to parents Edward Shankster, a coal carter (1851), and Elizabeth Cain. He was baptised on 27 June 1824 at Whitgift, Yorkshire

He married Annie Maria Gray (1860-1929)) on the spring of 1890 in the Glanford Brigg Registration District, Lincolnshire.