Author of the Serial for 1909 Primitive Methodist Magazine 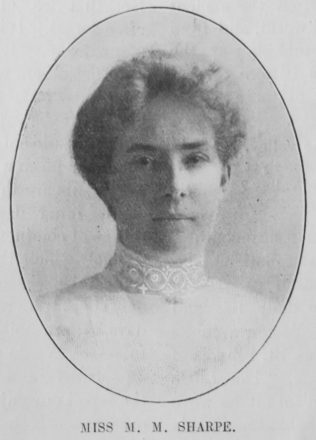 Some years ago I was commissioned by the Connexional Editor of that time to write a series of articles on Supernatural Experiences in the early days of Primitive Methodism, and learning that Rev. John Sharpe had once had a very strange experience with a “ghost” I wrote asking him to favour me with the facts. The reply came from his daughter. He himself was suffering from paralysis and quite unable to write. Miss Sharpe forwarded me a full statement of the facts which subsequently were embodied in my articles and appeared in due course in the magazine. This led to a correspondence on literary matters with Miss Sharpe, and I was greatly impressed with her literary gifts. About this time she had written a brief article on “Westward Ho” for a local literary society. This she casually enclosed once when writing me for my opinion. It was a remarkable production and I was betrayed into what Miss Sharpe considered a most unwarrantable liberty. I sent the article on to the Editor, Mr. Kendall, suggesting that he should enlist the services of this clever young lady. He was as much struck with the ability and promise of the article as I was, and lost no time in asking the author to write for the magazines.

In her next letter Miss Sharpe subjected me to the most terrific lashing it has ever been my misfortune to endure. Happily she got over her annoyance and began to write for the magazines. Her articles were exceptionally brilliant and the Editor considered her one of his most valuable “discoveries.”

Since then Miss Sharpe has been an occasional contributor both to the magazines and the Review, but all her friends have been awaiting the appearance of the magnum opus they felt sure she had it in her to produce. At last it has come. More than two years ago she undertook to submit for my consideration a serial story for the ALDERSGATE, but owing to a severe illness the work has been delayed. It has happily been completed and will next year appear as our serial in this magazine,

Miss Sharpe is the daughter of an able and devoted Primitive Methodist minister who rendered splendid service both in this country and in Australia. He was a bookman of rare knowledge and acquirements, and his library was one of the finest of its day in Primitive Methodism. His daughter Mary was born in Australia, and has thus enjoyed experience in two continents. The scene of her new story, “The House of the Good Friend,” is laid in Sweden, where she has been resident for some years. She thus writes out of an intimate knowledge of the country and its people, and her story abounds in charming sketches of both. The story opens with the runaway marriage of a young Swede of lowly birth and station with an American heiress. I must not betray the plot, but there is both comedy and tragedy in the story. If I were asked to indicate its two outstanding features I should say they are literary brilliance and profound religiousness. It is a deeply interesting story and no one can read it without being the better for it.

The analysis and development of character will be found equally striking and the element of surprise will not be wanting. Embodying the fruits of a wide knowledge of English literature the tale is as delightful for its literary grace and charm as for its keen insight and close observation. Our readers have a treat in store of no ordinary kind.

Mary was born on 22 July 1864 at Launceston, Tasmania, Australia, to parents John Sharpe and Elizabeth Herridge.

She married David Alexander Henderson (abt1857-1942), a Congregational Minister, in early 1910 in the North Bierley Registration District, Yorkshire.

Mary died in the spring of 1915 at Robin Hood’s Bay, Yorkshire.