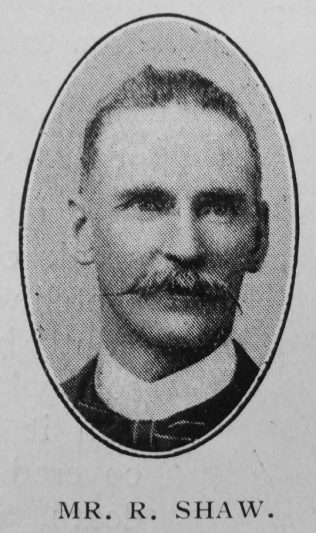 Our church at Whitehaven suffered a serious loss in the death of Mr. Richard Shaw, on May 3rd, at the age of fifty-eight years. He had been a devoted worker in our Church since his conversion thirty-seven years ago at Scalegill. He at once joined our Church at Moor Row, serving as teacher and Sunday School superintendent. Soon he became a local preacher, an office he filled with acceptance until he emigrated to South Africa twenty-three years ago, where he did much mission work in Johannesburg and district.

The writer remembers with what delight Brother Shaw received a copy of “The Herald” containing a photograph of the members of our first church in Johannesburg, included in which was his second son. All the time he was abroad he kept up his membership with us at Moor Row, and his affection and liberality to our Church never wavered. Returning home some years ago our brother threw himself into the work of our circuit. He served as class leader, treasurer to the trustees, and for a time as one of the station stewards. Bro. Shaw had been delegate to District Meeting, and served also as a member of the District Committee.

Next to his love for his Saviour was his affection for the Church. Mr. Shaw was a man of strong religious conviction and of sterling character, and in his death, his widow, who survives him, loses a most devoted husband. He also leaves three sons, one of whom is the Rev. Thomas Shaw, of Shildon.

The interment at Egremont was conducted by Revs. J. Graham (2) and Jas. Henderson. Rev. T.P. Ellis represented the District. The following Sunday a memorial service was conducted by Councillor Cowen, of Whitehaven.

He married Margaret Ann Doley (1857-1926) in late 1876 in the Whitehaven Registration District, Cumberland. Census returns identify three of four children. Based on census returns, Margaret did not appear to accompany Richard to South Africa.

Richard died on 3 May 1912 at Whitehaven, Cumberland.