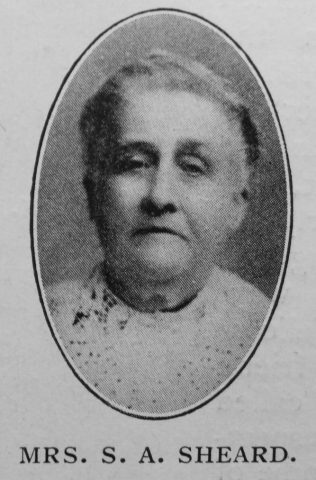 Transcription of obituary published in the Primitive Methodist Magazine by F. Holmes

The daughter of Jonathan and Mary Castle, our sister was born May 4th, 1839, at Scholes, near Huddersfield. Mrs. Sheard was converted at the age of eleven, put on the plan at fourteen, and quickly developed into an Evangelist of unusual power. Before she was twenty years of age she had conducted many Missions. Everywhere the Word of God was accompanied with abundant signs of blessing. She even supplied the work of the second minister of her Circuit for three months.

The Rev. John Swales, who knew her work at this time, writes: “She was a woman of striking personality, and markedly sincere. Her preaching was clear, forceful, and scriptural, and she avoided all sensationalism. The conversions were real and abiding.”

Mrs. Sheard was twice married. First to Mr. Harry Tinker, but he passed away after only a year and nine months of married life. Then followed twelve years of happy labour as Scripture reader in Huddersfield, with all her week-ends free for preaching.

In 1872 our sister was married to Mr. Sheard, of Drighlington, and was a mother indeed to his children. He died in 1888, and since then Laisterdyke, Pudsey, and Morley have been the scene of her labours as sister of the people and district visitor.

In 1907 she came to Southport to reside with her daughter, Mrs. J.S. Marlow, and though always hampered by weakness, took an eager share in all spiritual things. One of her last gifts to our Church was the first two weeks of her Old-age Pension to our Centenary Fund, which was followed by another gift (making £1. 1s.), as soon as she could afford it.

She passed away April 5th, 1910, and was interred on April 8th at the Southport Cemetery. Revs. T. Mitchell, J.T. Barkby, and F. Holmes taking part in the service.

Sarah was born on 4 May 1839 at Scholes, nr. Huddersfield, Yorkshire, to parents Jonathan Castle, who worked the land (1861), and Mary.

Before her marriage Sarah worked as a woollen hand loom weaver (1861). The 1871 census return describes Sarah as a missionary.

She married Harry Tinker (abt1842-1866) in the spring of 1864 in the Huddersfield Registration District, Yorkshire.