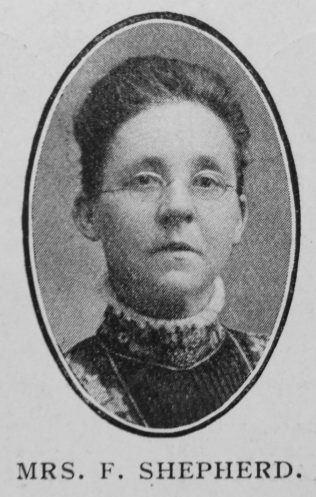 Transcription of obituary published in the Primitive Methodist Magazine by Geo. E. Miles

The Ann’s Road Church, Sheffield Eighth Circuit, has suffered a heavy loss in the death of Sister Shepherd, wife of our Circuit. Steward and School Superintendent. Born in the village of Mosboro, she was a scholar and teacher in our Sunday School until, a year after her marriage, she removed with her husband into Sheffield. First in the Sellers Street Mission, then at John Street, then at Goole, and then back to Sheffield at Ann’s Road Church, she threw her whole soul into the worship and work of the Church she loved and cherished.

From early girlhood she was the same gentle, unassuming, transparent Christian. Of few words, unobtrusive, ever shrinking from public gaze, she lived out her religion in the quiet ways of common duty. In the home she was a queen, the heart of her husband trusted her, and her children call her blessed. She spoke little of religion, but she loved her Lord, and in the manifold ministries of her husband she took proud delight.

But in mid-life, after much pain and suffering, suddenly God kissed her and she slept.

Edith was born in 1864 at Mosborough, Derbyshire, to parents George Frost, a joiner and farmer (1871) and Sarah Dawes. She was baptised on 25 December 1864 at Eckington, Derbyshire.

She married Fred Shepherd (1860-1920), an insurance collector (1891), in the spring of 1884 at Eckington, Derbyshire. Census returns identify seven of nine children.