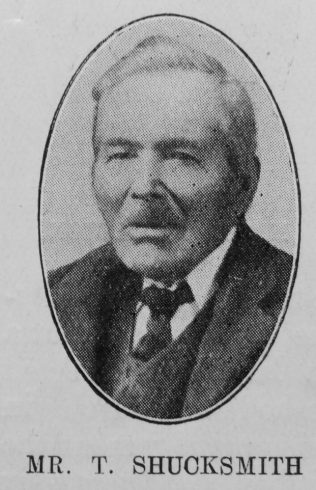 Transcription of Obituary published in the Primitive Methodist Magazine by J.W.W.

MR. THOMAS SHUCKSMITH of Barnsley, fell asleep in Jesus on May 2nd, 1909, at the ripe age of eighty-one. Converted at Scotter in early manhood, he joined the Primitives over fifty years ago and was a recognised, local preacher over forty years.

During the Crimean War he enlisted on the battleship, “Hastings,” saw several engagements, and was once under fire for twelve hours when the ship was on the rocks. He took part in the capture of Sebastapol and served in the trenches there.

For some forty-four years he was a member at Westgate, Barnsley First. An old-fashioned Primitive, he loved his church, enjoyed its fellowships and camp-meetings and its evangelistic fervour. His preaching and prayers were full of nautical phrases. Within a few months of the end he lost his sight, but was very patient during his affliction, and greatly enjoyed the visits and prayers of his brethren. To him Christ was precious.

A funeral service was conducted by Rev. J.W. Waddell, assisted by several local preachers. He also conducted a memorial service in Westgate Chapel, making fitting reference to the life and service of this good, earnest, heroic man, who will not soon be forgotten. “Let me live the life of the righteous and let my last end be like his.”

Thomas was born abt1828 at Ingham, Lincolnshire, to parents Joseph, who worked the land, and Sarah. He was baptised on 6 April 1828 at Spridlington, Lincolnshire.

A short obituary in the Sheffield Daily Telegraph (6 May 1909) records that Thomas joined the Royal Marines at the age of 23 and saw service on the following vessels; Merlin, Hastings and Dee. he received a wound on the latter vessel which put an end to his military career.

Mary had a daughter, Isabella (b abt1864) from a previous relationship.