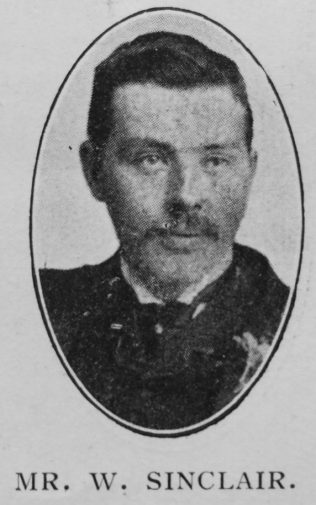 Bro. Wm. Sinclair was born at Stanhope, December 22nd, 1868, and from his early days was connected with our Church. Entering the school at an early age, he retained his connection with it till a comparatively short time before his death, and only left it when compelled by reason of his work to take up his residence some distance from the town. For several years he acted as secretary, and no school had ever a more devoted or faithful servant than he; every detail of the work received his careful attention.

Keenly interested in Temperance matters, in addition to work in our Band of Hope, he did much to assist in establishing the Juvenile and Adult Tents of the Rechabite Society in the town. Deeply engaged in the work of our own society, he filled the posts of assistant class leader, etc.

By nature our brother was quiet and of a somewhat retiring disposition. He was in turn a faithful son to his widowed mother and a devoted husband and father. It needed but a slight acquaintance with

him to be conscious of the manliness and sincerity of his nature. His integrity was beyond question. He lived that which he professed, and by his steadfast adherence to principle and daily manifestation of the spirit of his Master, he exerted a wonderful influence for good.

A tall and powerful man, he apparently had many years of active service before him. Early this year, however, he was stricken down, and after a painful illness, borne with fortitude and patience, quietly passed away on June 2nd, being then forty-one years of age. His interment took place on the following Sunday at Stanhope. Our large church was full of friends who had gathered to pay their tribute of respect to the deceased. Rev. J. Ramsay delivered an address, and also officiated at the grave. “His sun has gone down while it was yet day.”

William was born on 22 December 1868 at Stanhope, Co. Durham, to parents William Sinclair, a plate layer (1871), and Anne Wallace.