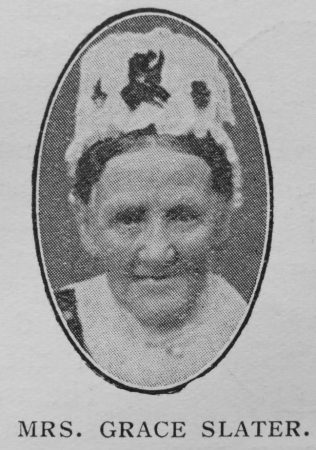 Transcription of obituary published in the Primitive Methodist Magazine by J.H.T.

By the death of Mrs. Grace Slater, February 21st, 1911, in her ninetieth year, the Matlock Bank Church lost its only surviving original member. Born in September, 1821, when the Primitive Methodists visited Matlock in February, 1837, she was converted, joined the Sunday School they started, and also became a member of the infant Church. Her first Class Ticket (February, 1837), yellow with age, is still carefully preserved.

She took an active part in Church work from the first, and her interest never ceased until her death. A regular attendant at the Sunday evening service, she was there only nine days before she died. Her husband, whose loss nine years ago, she greatly mourned, was one of the most faithful and devoted servants a Church could have. She and he walked together, witnessing for Christ in a happy married life, for over fifty years. They trained their children in their own spirit, and each of them, with their children, is associated with, and loves our Church to-day.

For some time she had been eagerly awaiting the call home. The summons, when it came, was sudden, but it found her ready and with the words “Jesus, Jesus,” upon her lips, she passed from this life and exchanged the infirmity of extreme old age for perpetual youth.

The first part of the Funeral Service took place in the Church she had loved so well, and there the Rev. James Burton, formerly minister at Matlock, delivered a beautiful tribute to her memory. The Committal Service, at St. Giles’ Churchyard, was conducted by the Rev. J. Harryman Taylor, M.A. The latter also officiated at a Memorial Service on Sunday evening, February 26th, when the Church was crowded.

Her long pilgrimage is now over, and she is united with her loved ones gone on before.