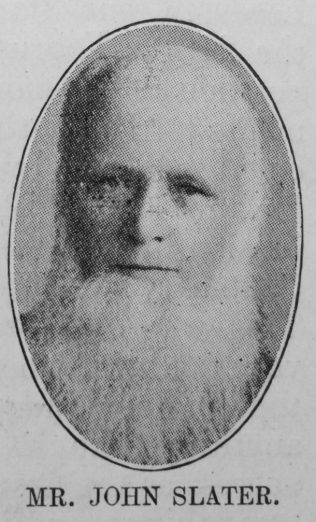 In the quiet eventide of Sunday, January 10th, the spirit of Mr. John Slater; of Matlock, passed into the light of the eternal Sabbath, in the seventy-second year of his earthly life.

For over fifty years he had been connected with our Matlock Church, and was so willing a worker that a great gap is created by his call to the more enduring service of heaven.

He was a front rank man, having been Sunday School superintendent for over thirty years, and trust treasurer for thirty-four years. He was also trustee for three out of the four churches in the circuit; a local preacher and class leader; and was well-known in political and temperance circles. His life-story could be summed up in the one word “faithful.”

His wife—a splendid helpmeet-—pre-deceased him a few years, and seven sons and two daughters are left with a noble example to imitate. Most of them are actively engaged in Christian service.

The funeral was very largely attended; deputations being present from each church in the circuit, together with representatives from several public bodies.

Professor A.L. Humphries, M.A., who gave a chaste address at the funeral, writes: “Among the laymen whom I have known and honoured during my ministry, Mr. John Slater held a foremost place. I count it a very great privilege to have known him and to have been counted among his friends. It is not easy for me to say how much I admired him. He was a man who put his religion into all his life, so that people were bound to respect him for his sterling integrity, whilst, as for our church, he served it with a single-hearted devotion such as I have never known surpassed.”

Rev. G. G. Martindale says: “Mr. John Slater was transparent, loyal, generous, and affectionate. He was a most devoted member, worker, and leader in the church at Matlock. Our church, and every good cause in Matlock has lost a real friend.”

An impressive memorial service was conducted on Sunday evening, January 17th, by Rev. Jas. Burton; when every mark of respect was paid by the large congregation present. ‘‘To live in hearts we leave behind is not to die.”