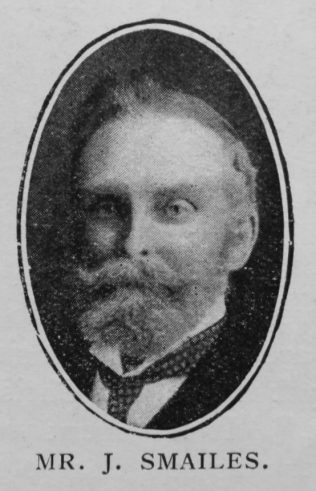 Transcription of obituary published in the Primitive Methodist Magazine by F.H.

Mr. Joseph Smailes was born at Castle Eden, January 15th, 1843. He passed into eternal rest on December 26th, 1911, at Boldon Colliery, South Shields Circuit. At four years of age he went to reside at Moorsley, Durham Circuit, and remained there thirty-eight years, and came to Boldon Colliery in 1884. Commencing work at an early age, he eventually reached the position of master stoneman, having spent fifty-six years in the coal mine.

Brother Smailes was of the finest type of Primitive Methodists. For forty-five years he was one of the most ardent and devoted members of the Church. In season and out of season, to the end of life, he planned and prayed and laboured for the welfare of our Church. For many years he was Choirmaster both at Moorsley and Boldon. To see him, and hear him, leading the procession into Durham City for the camp meeting in his early days, we are told, was an inspiration.

For over a quarter of a century he has been Sunday School Superintendent at Boldon. And what a Superintendent! How the children loved him and the teachers delighted to serve under him! He was constantly visiting them. Any fresh family coming to the village would soon have a visit from him. In every home he was welcome. At all the services his beaming face and cheery words were a benediction to preacher and people. Many ministers have testified of his valiant service.

In the current number of the Parish Magazine the Vicar of Boldon pays a fine tribute:—“Our P.M. friends, in the death of Mr. Joseph Smailes, have lost a saint whose bright example will long serve as an inspiration to the parish.” Our sympathy is with Mrs. Smailes.

Joseph was born on 15 January 1843 at Castle Eden, Co. Durham, to parents John Smailes, a coal miner, and Theodora Ainsley.