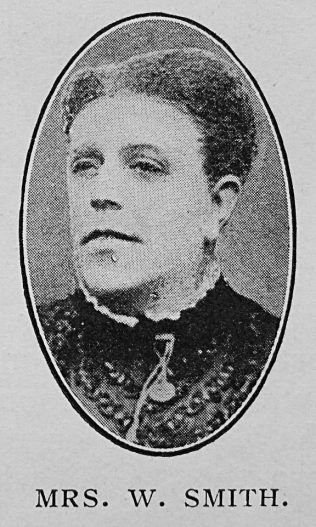 Transcription of obituary published in the Primitive Methodist Magazine by H.H.

On Sunday, November 20th, 1910, Mrs. William Smith, of the Wisbech Church, passed swiftly and unexpectedly to her rest.

The Church at Wisbech has many loyal and faithful workers, among whom our late friend stood in the front rank. There was something uncommon in the beginning of her discipleship. After a period of conviction, during which the secret had been carried in her own heart, she divulged the fact to her father late one night. He was of a Godly sort, and knew how to help a soul in distress, and sending immediately, though near midnight, to one or two praying friends, they wrestled together until the prisoner was free. The genuineness of that conversion was evidenced in 40 years’ faithful attachment to the Church she loved.

Her value revealed itself in the house where many preachers have rejoiced in hospitality which left nothing to be desired. More than 30 years’ service in the Sabbath School has borne fruit in changed lives, and strong Christian attachment. Rarely was she absent from the worship of the Church. Also in the smaller things of Church life she readily took her share. Of a compassionate nature, her kindness expressed itself in many gifts to the needy. As a counsellor her advice was sought and proved itself generally to be the product of a wise and penetrating mind. It was a privilege to share her friendship, and to know her character. How she loved God, the Church, and truth; how thoroughly she scorned pretence and sham, and how profitable had been her reading of Apostolic Counsel, “Be ye steadfast, unmovable, always abounding in the work of the Lord.”

Revs. A.E. Rose, W.H. Curtis, G. Bell, B. Bell, and H. Hide took part in the funeral service, at which a large company were present.

Elizabeth was born abt1851 at Terrington St John, Norfolk, to parents Robert Gamble, a farmer (1871) and Susanna Sutton.