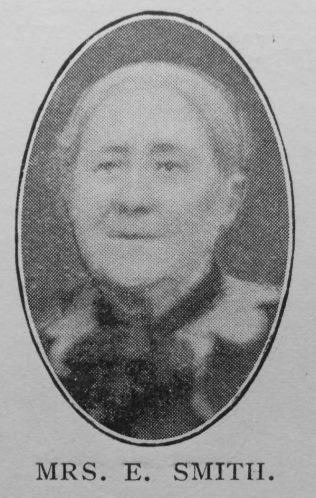 Transcription of obituary published in the Primitive Methodist Magazine by W.D. Cox

Mts. Elizabeth Smith, the widow of Geo. Smith, one of the founders of our Newhall Church, in the Sheffield 6th Circuit, went home to God on October 12th, 1910, at the advanced age of 83 years. Our sister was converted at the age of thirteen, going home from a Missionary Meeting. The voice of God spoke in her heart, and she knelt down by the road-side, and there began a life-long discipleship with her Lord.

She was a true helper of her husband, alike in his business and in his religious work. During the early days, when life was a severe struggle with them, they promised thirty shillings to the New Building Fund, and rather than break their promise they sold a sofa to raise the money. This is but one example of their love and loyalty to Primitive Methodism.

Elizabeth Smith had a clear and forceful mind. She read widely and with keen appreciation. But the supreme thing in her life was her religion. She loved Christ supremely, and loyally followed Him. She often said to the present writer, “I love everybody.” And of her children, who watched and tended her lovingly, “They are kind to me; everybody is so kind.” Her son says, “She had an intense love of righteousness, and I never knew her do a mean action.” Rev. James Lockhart, writing to the family, says, “She was the soul of kindness and goodness. I esteem your parents as amongst the best people I have ever known, and gratefully and reverently thank God that I ever knew them. They were formative influences in my life, and I owe them more than pen can narrate.”

During the last two or three years, she longed to get home. She felt her task was done. She has passed through the world leaving gracious, fragrant memories, and exercising a kindly, helpful ministry.

Elizabeth was born abt1827 at Syndall, Yorkshire.