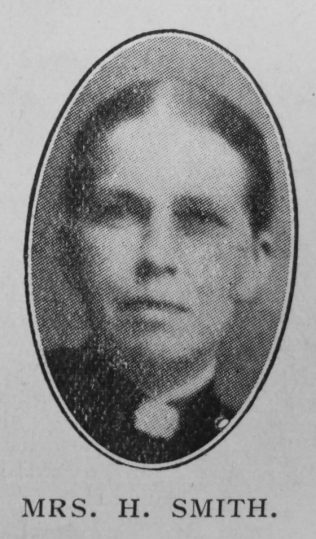 Transcription of obituary published in the Primitive Methodist Magazine by Thos. Storr

Mrs. Hannah Smith, the beloved wife of Joseph Smith, of North Thoresby, in the Tetney Circuit, passed away on February 8th, aged seventy-seven years. The daughter of John and Hannah Cooke, of North Thoresby, her first husband was James Blyth, of Brigsley. Soon after her marriage with Mr. Smith, they removed to Grimsby, and for nearly forty years were earnest workers with the Flottergate Church.

Mrs. Smith was converted in early life, and for more than sixty years was a loyal follower of Jesus Christ. She was a true helpmeet to her husband, and a loving and wise mother. Her love for the services of the sanctuary was intense.

In the autumn of last year they removed to North Thoresby. Rev. A. Naylor, of Tetney, writes: “She possessed a rich faith in God.” She was interred in Thoresby Churchyard, the writer assisting the Vicar in the service.

The 1851 census return records Hannah as a nurse. In 1871 she is described as a schoolmistress.

She married James Blythe (abt1830-1867), a master shoemaker (1861), in the summer of 1858 in the Louth Registration District. Census returns identify two children.