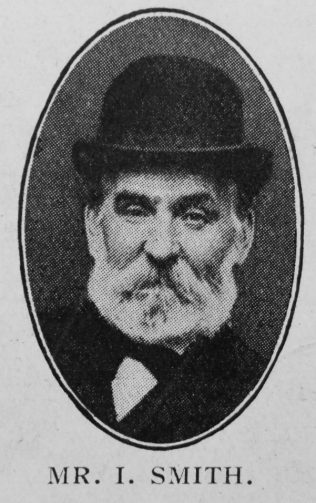 Transcription of obituary published in the Primitive Methodist Magazine by M.P.P.

With the passing of Mr. Israel Smith, our Church at Houndsworth, Birmingham, has lost one of its leaders, a man of high principle and noble life. A Primitive Methodist of the third generation, his father’s family founded the Primitive Methodist Church in Lyneham, Oxon, where our friend was born and reared until, in his nineteenth year, he came to Birmingham. He joined our Chapel Street Church, and for thirty-nine years gave to it unstinted devotion and service.

As a class leader his service was unique. He led his people into the inner sanctuary of faith and life. Possessing a mind broad and spacious, a soul finely cultured, our brother was one of nature’s gentlemen. It was a means of grace to know Mr. Smith, an honour indeed to be his friend.

Death opened to him the Gate of Life Saturday, April 20th. He was buried in the churchyard of St. James’ Church, Houndsworth, Friday, April 26th. The funeral service was conducted by Messrs. Lloyd, Putley and Tyzer and Rev. M.P. Pearce. May God comfort the bereaved ones!

Israel was born in the spring of 1854 at Lyneham, Oxfordshire, to parents Timothy Smith, who worked the land (1861), and Ann Davis.

Note: Israel died at Handsworth, not Houndsworth as stated in the obituary.